Kushina know that to marry someone must be because of they love each other unconditionally,

and to love someone that deeply they'll be living together for a lifetime.

But one thing that she know what true love is when the day she and Minato lie on the prairie under the sea of glittering stars like diamonds.

With a familiar bright and warm smile, Minato said to her

And since then Kushina know that their love is pure.

Say in Romeo and Juliet style

Naruto Said : Everytime I close my eyes I can see you by my side Tell me babe, what else can I do ?. It doesn't bother me at all How many seasons fall You'll always be here in my heart HINACHAN <3

While Konan was bandaging Yahiko's body their eyes met. Emotions long withheld began to boil up, while they realized that death can do them part at any given moment.

He averted his gaze saying: "Nagato is going to be the bridge to world peace."

She understood what he meant. It wasn't just about Nagato's importance. It was about them three being a family for so long. They both felt bad about the idea excluding Nagato from any part of their lives.

Yet, suddenly he was right in front of her, eyes meeting again. His breath heavy, cheeks blushed, body quivering, and her body responding in kind. For a moment they just stand there as if surprised by their own feelings, until he spoke again:

"We may find world peace, but there can't be peace in my world without you. I love you Konan".

"Yahiko...", she said nervously. One more time the thought of saying "I won't have time for love until we reach world peace" crossed her like she once answered Kyusuke the Swift's love approach, but she couldn't be a strong kunoichi anymore and this wasn't Kyusuke. So instead she only uttered "You were always my bridge to peace. I love you Yahiko."

Their embrace unleashed a lifetime of emotions leading off into the night neither of them will ever forget.

Nagato was outside their hideout, only briefly overhearing a part of their conversation. With a knowing smile, even before anything occurred, he gave them their privacy and retreated to the river bank, standing guard for his friends. Softly uttering to himself: "Tonight the sky cries the tears of joy."

In the morning of their sleepless night, while still in each others warm embrace, Yahiko whispered to himself: "Maybe everything will be right this time".

Konan wasn't sure what she thought of it, but she felt like Yahiko had an insight about something into the future that she was afraid to ask about. She was content about them being just like this for the time being and only repeated again "I love you".

Answer: Rin tells Obito "To save you is like saving the world"

Answer: Naruto goes on top of the Hokage Building and Shouts "Happy Valentines Day Hinata and Everyone!"

Answer: I love you Hinata. You're the winner of the ichiraku gluttony contest!!

Answer: Madara should appear above all of Konoha and rain his love upon all of the village in the form of a Chibaku Tensei!

"I love you more than ramen Hinata." 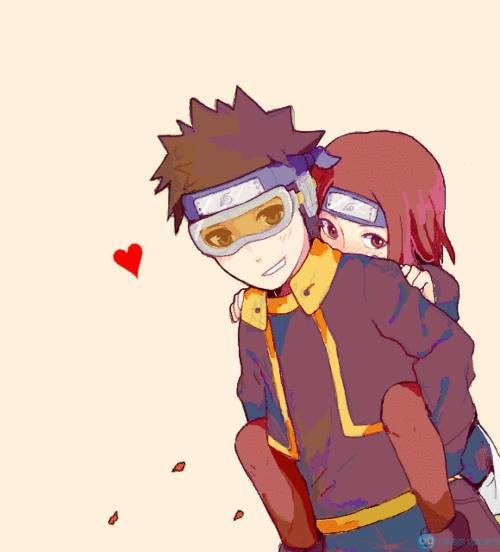 Asuma: "It's like you used a genjutsu on me, because your beauty is enchanting"

Answer: The blonde woman feels something within her that she has not felt for a long time. The feeling of tremendous anxiety during the moments before the countless number of wars and battles she has gone through could never compare to the intense pressure building up in her chest right now. She clasps her hands together and takes a long deep breath.

You can do this.

She reassures herself as she shakily walks through the small that leads through the thick forest outside the village. The chirping of the birds and rustling of the trees somewhat helps the alleviate her distress. Small rays of sunshine peek through small gaps in the thicket, serving as a guide to wary travelers. Moments later, she comes to a clearing among the trees and there she stops. Just a few distance away she sees the person she came here for; the person she holds dear to her heart.

She greets out as she resumes to walk closer to him. Her knees quake as she sits down beside him underneath the shade of a big tree. Her hands tremble as she begins to pour sake for the two of them. She takes a huge gulp and immediately welcomes the warmth of the alcohol run down her throat.

"Do you remember the times when the old m*ed to train us to death and you were always on the verge of crying? Seeing that face of yours almost makes all the exhaustion go away."

She says, a smile forming on her lips. She rambles on; about the times they shared, the pain, the happiness, the regrets. And after she has downed the last drop of sake, a comfortable silence envelopes them

"You know, when you told me you were going on that mission alone, I regret not going with you. I should have been there with you. Who knows, if I did then we might've won and come back to the village together."

A single tear begins to form. And then another. Followed by another. Until they all coalesce and form a stream of tears filled with bitter regret that flow down the blonde woman's cheeks.

"At the very least, I should've told you how I felt while I still had the chance."

She wipes her face and forces out a weak smile. She takes out an unopened sake bottle and sets it down near the tombstone that reads out "teacher".

"If you had come back to the village alive, I would've been open to us being together. Not that it matters now, I guess."

She stands up and takes a last long look at the simple grave. Images of the legendary toad sage flash through her mind and she comes dangerously close to crying again. Instead, she holds strong and instead lets out the words she wished she had said to him.

And with those last words, Tsunade walks back to the village.

Sasuke:I want you to leave me alone

Boruto: Dad there is someone entering the village, who is that?

*Jiraiya looks back at naruto smiling*

Naruto: Sensei! i did it... i became hokage, i finally did it!

*Jiraiya puts his arm around Naruto and starts to cry*

UID: 200000093441038
Server ID: S231
In-Game Name: ConnectionBreaker
Answer: In Great Ninja War when Neji was stabbed protecting hinata from the harm, Naruto helds Neji, while Neji is on his last breathe he asked Naruto to give a letter to Tenten which he secretly inloved with. When Tenten receive the letter she burst in tears since she love him also and didnt get a chance to say what she trully feels until someone is already dead. END

Answer: Naruto will say "i love you" to Sakura and she'll punch him in the face.

In-game Name : Fall In For You

Answer: Direct Kiss to sakura !! what ever she thinks it doesn't matter !! I love you that's all after kiss her naruto should mention it.