I have a single screenshot of a weird question that I took last minute just so this thread can have a bit of weight, but off the top of my head this Quiz I just took had at least two questions with wrong answers:

In a question about where Hidan hailed from, the "correct" answer was said to be A) Rivers. The ACTUAL answer is "Hot Water" or "Hot Springs", but neither of those translations were available.

In a question as to who Motoi's friend was, the "correct answer was said to be D) Deidara. The other three answers were Omoi, Darui, and Karui, I believe. I picked Karui because whatever. What the actual heck?

And here's a screenshot of a question that is cut off.

I just want to be able to be wrong and have a legitimate reason for being told I'm wrong instead of it being musical chairs with choosing the cats because the questions and answers don't line up with each other. I don't know. I really like Quiz games and I like being right, so this feature being as garbled as it is irritates me more than anything else.

LOL I can't understand that either. Formation of Four Red Suns .. then how it jump to Madara's clones. 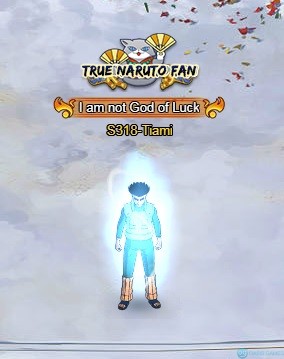 Like, one of question was about who is the owner of Karasu puppet. Answers: Sakura, Kankuro, Kankuro, Kankuro- after R&D filtering two of them- Kankuro and Kankuro left xD Luckily I picked Kankuro

So yeah, wonder if we will live to that wonderful time of this event being fixed- and call to Oasis staff- just because some part of community doesn't care about this event, doesn't mean you can't take some serious steps to fix it. How hard it is to fix translation issues, which are most common mistake there? I know that this event doesn't bring any income but it's a joke for such bugs to be around for so long when so many people call out for fixes.

will they ever fix the translation?

find out in the next episode of adldiclpno lol

seriously translation *s... its fun to poke at but at the same time it is so frustrating sometimes.

probably not, it's far easier to adapt to the changes than wait for oasis to do something. oh well.

plus i have certain issues myself that i'm disturb with but it's not in my hands to do something about it..

those kinda things I ain't fixing, because it ain't within my control nor my prob really.

Who's that ninja? ;torune face pic;

answers: a and b are wrong coz of group research. kurotsuchi or ino? I had 180 points 100% good but I quessed its ino, but right answer was kurotsuchi. This happens every quiz. Or smth like ;some random quesstion; Answers: a a a a. How can we say which a is good?

There are always plenty of wrong questions/answers. And every update just adds errors back in if they ever get fixed. Here was a good one from last week that we got:

Eventually you figure out the pattern to the wrong ones, so when you see ones being obviously wrong, that's probably the answer. For questions like this one, the answer tends to be the first instance of the "correct" answer.

Truly annoying. They need someone to go through all of the questions and make sure they are corrected. But who knows if that will ever happen.

Just knowing had to have perseverance to seek the truths of the twilight !