I've had to rewrite this three times already because the forum flaked out and deleted my progress. So please pardon me if things are messier th@n usual.

...So recently I saw a bad ad for a Naruto game and tried it out. As it turns out, this game is a huge knockoff of Naruto Online.

Now, as a disclaimer, this game is honestly absolute garbage. I wasted 3 hours of my life on this that I'm never going to get back. Anyone with a sane mind should never play this game because they'll just be wasting their time, which is also why I'm omitting the game name.

But lo and behold, guess what I found? 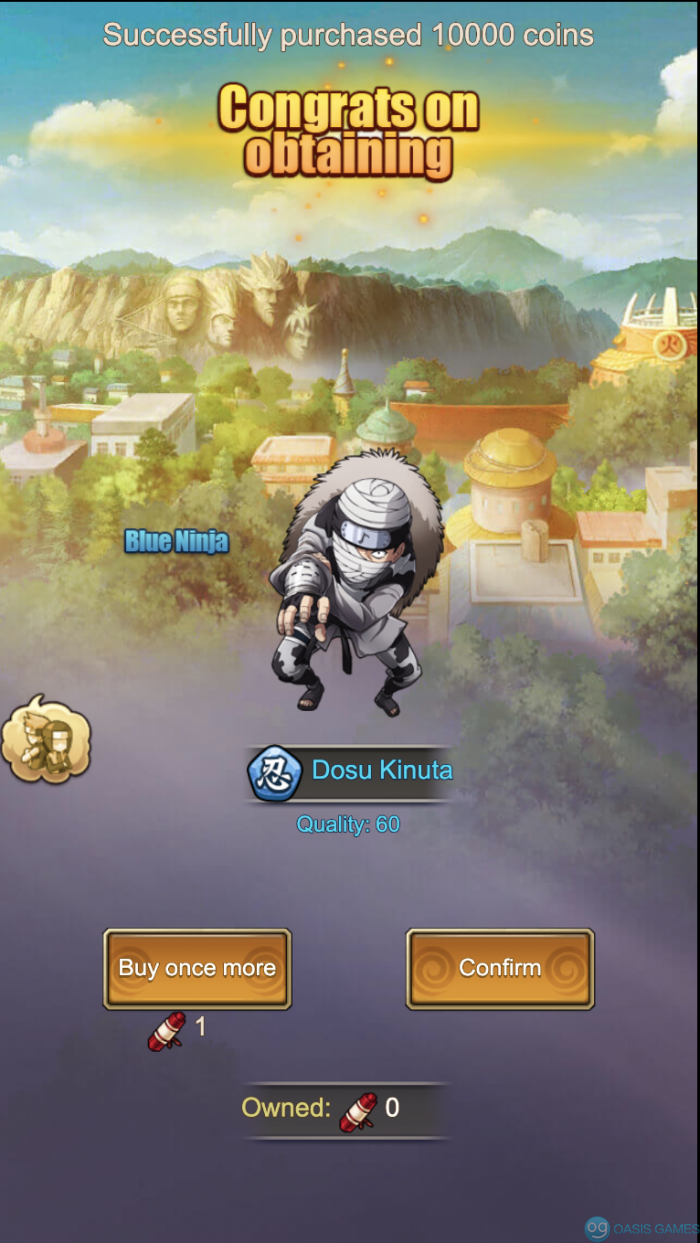 Lo and behold, Dosu is a playable character. And this is the first version of the game - it wasn't even suggested by the players or anything like that. The devs chose to add him in.

Meanwhile, the original suggestion to add Dosu and Kin as playable characters was back in August 2016. I didn't even suggest it, either. 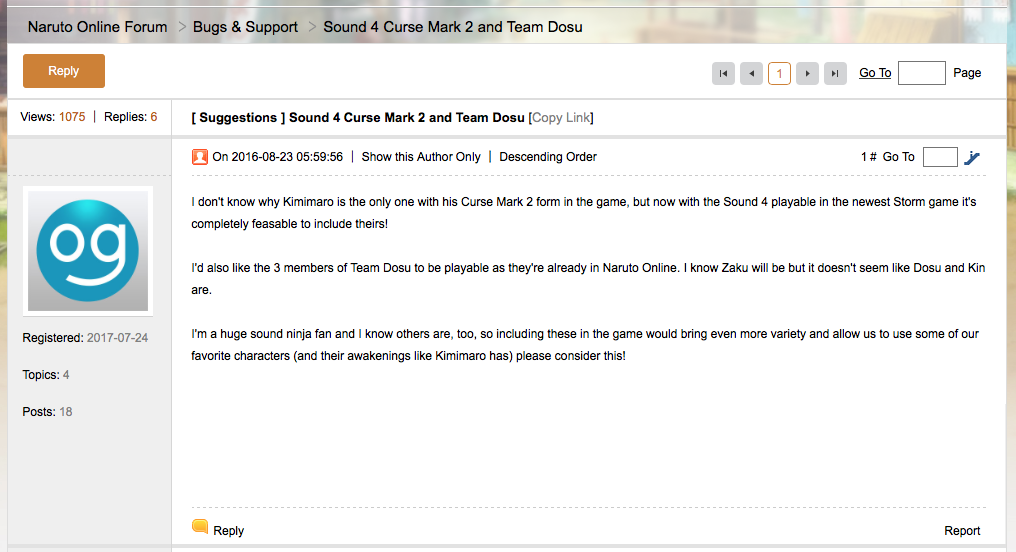 It's been almost two and a half years at this point.

I think it's funny how a shoddy knockoff game puts Dosu in, while the official, Bandai-Namco endorsed Naruto Online doesn't have him as a playable character... while people are running amok with Chirikus. Don't get me wrong, it's still awesome that Chiriku is playable because he's a character who barely anyone would remember from the anime. But the thing is I am more than certain that Dosu appeared in more episodes, had more screentime, and even had more plot relevance than Chiriku.

...Now I like to consider myself a patient person. Perhaps it's self bias. I get that making characters takes time, and effort.

But judging by my time playing some of Tencent's other games, it takes around a month for Tencent to make new characters for that game. That new playable Genma who's the February login bonus? I'm pretty sure it took a good portion of the month of January to make him, and boy does he look cool.

But this other Tencent game that I'm talking about needs more assets and sprites than Naruto Online does, just because of the nature of the gameplay. So in theory, it should take less than a month when it comes to Naruto Online characters.

I understand if that takes time. It takes about six months or so for Intelligent Systems to add new characters to their Gacha Game (whose name I will not mention, because this forum doesn't like me mentioning other games' names). They ask the artist to draw the assets waaaaaay in advance, and get the voice actors to record their lines waaaay in advance, and finally, many months later they have everything and add the character to the game.

But guess what? Tencent already has all the assets they need for Dosu. I've explored several of their other games, and it's more than evident that Tencent has all the Dosu assets they would need to add him in. In fact, for Naruto Online Mobile they actually made more Dosu sprites for the game, and gave him a working chase!

And, surprise surprise, Tencent also already has all the voice clips they would need to add Dosu as a playable character in the game! They left Dosu silent in Naruto Online, but in the other Tencent games, Dosu has voice clips. And quite a few, actually. More than I expected from Tencent. Good job! That made me very happy.

So since the devs have all the supplies they need to add Dosu into the game, all that's left is the programming, right? That should take some time, right?

Except Dosu was actually a playable character in the early beta stages of the game who was removed during development! 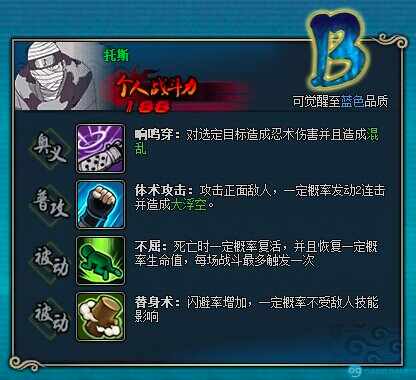 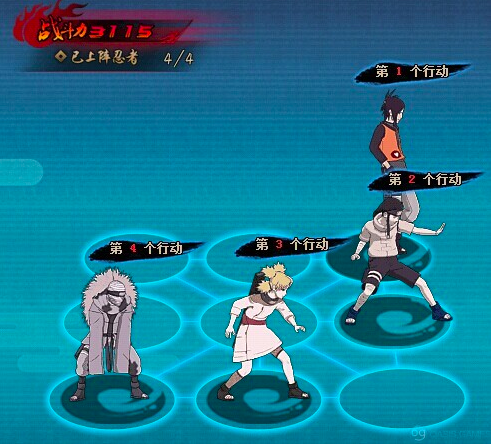 So in theory, it should be very easy to add him back in. Tencent has literally everything they need.

I don't think it should take two and a half years to get Dosu's assets, grab Daisuke Egawa for some voice clips, and program Dosu into the game when he already has the assets and voice clips he needs, and was originally programmed into the game and removed. Especially when a knockoff game does it so easily. And as the Official Game, you'd expect this game to have a higher standard than a ripoff game...

Now... I understand that this is a complicated process. In the last Case I made, six and a half months ago, Tobei responded with some pretty informative stuff, and now I'm a little more aware of the work that has to be done for a suggestion to be really applied into the game.

"Suggestions are the only section I allow open because...well suggesting does lead to a decent discussion on normally what the suggestion is. And we moderators deem the suggestion fit for a file or not depending on what it is. Majority of the time suggestions will never see the light of day due to how the game is processed and distributed."

"Understand there's an international team with their own versions that have plenty of suggestions of their own. Of which, we'll all have to combine and see what can fit into the game. Not everyone will see them come to fruition, while the majority will be disappointed."

...And now I'm going to say something now that will undoubtedly come off as entitled to some people, and I really do apologize for how it sounds.

You would think that, judging by everything, that the rational thing for a dev team/mod team to do regarding suggestions is to find the ones that are more sensible and/or have more thought and effort put into them, and focus more on those instead of the many "hey do this lol" suggestions that they get swamped with. That's definitely what I would do were I in your place as a mod.

Now is there any other suggestion that this game has received that has been pushed for such a long time, with the same amount of effort, or more, that I am?

I earnestly would like to know. And if there is one, I'd like to see it. It'd make me happy to read it.

At this point, in all honesty, I'm not sure exactly what more I want. I know I can't just expect them to add Dosu tomorrow, because of all the international shenanigans. So I have to expect something else.

Maybe it's a disproval, some point to show that adding Dosu into the game isn't as easy as I'm conjecturing it is. Maybe I just want you guys to ask the developers again.

Maybe I want to see something like what Tobei said:

"However, there's hope because of the filler characters in CN. We could see a greatly upgraded Dosu with actual skills. So I wouldn't lose hope entirely. But I can't promise anything either."

Maybe I just want to see more Dosu. I dunno.

TL:DR: Still waiting for the developers to do something which seems as simple as a homework assignment with all the answers given to you already. Even a shoddy knockoff game can do it - and they did, before Naruto Online did, too.

They have everything they need. They just ain't adding Dosu.

Sorry for bringing this topic up again, but it's been another half a year. Maybe these should just be annual xD... yeah definitely.

That's all I have today - Dosu out.

I wouldn't say it better than you- I see NO REASONS why Dosu is not in game yet with all they have to actually add him and whole this time that have passed from releasing game.

Meanwhile we get some some characters that people don't even remember/know from the show (Shira? Shizuka? How much of a screen time they got and does anyone even remember them?) OR yet another version of the same ninjas we got 5 different copies in game already.

Team Dosu played a very important role in early series and I will forever fight alongside with Forum Dosu for all of them to be add to game.

No reason that Dosu is not in the game yet? How about the whole community crying everytime a useless * meme ninjas gets introduced to the game?

Mind you, I would prefer to get actual character from series than another ninja cat or swimsuit/new year joke of a ninja.

And you would be surprised how many players don't cry for getting meme ninjas, so don't generalize with "whole community", thank you u.u

There's a simple solution to that: make him into a genuinely workable character like Chiriku.

It's not like they don't have the sprites for it.

Also, if that was the case then why did they add Zaku? Or literally ANY of the cats?

that's a big f for you buddy

...what's this game btw, i feel like torturing myself for an hour

I'm still apart of your cause.

There's a reason why they don't add dosu back into the game, it's because he'll break it

some legends are just never awakened as their power/movesets would destroy the game ...

op you have my empathy stay strong but i can see why oasis wouldn't add him,