This one is super tough and you'll need a lot of power, at least 180k to beat it. Kudos if you can prove me wrong and beat it with less power though.

It's been a while since I've written a new guide, but I hope this helps

Getting an Error 404 on this li

Edit: Never mind, it's the censorship on the li

What letter is the one censored? We can't open the li

yep it works now thanks

Sorry for the trouble! The censoring is pretty terrible...

I made a tinyurl li

Oppai brother I used your guide also thanks for that !

You are awesome, thx Oppai. I just done it with your guide :D

second wave if your super stacked, angel can even kill orochimaru leading to a super easy win

I've got Konan and So6P Naruto but not Kisame. Need Halp

If you cant complete Ninja exam 300 in these days, you can try it after like 1-2 weeks.

Because the more people will complete Ninja Exam the easier it will be, you can check it right there : 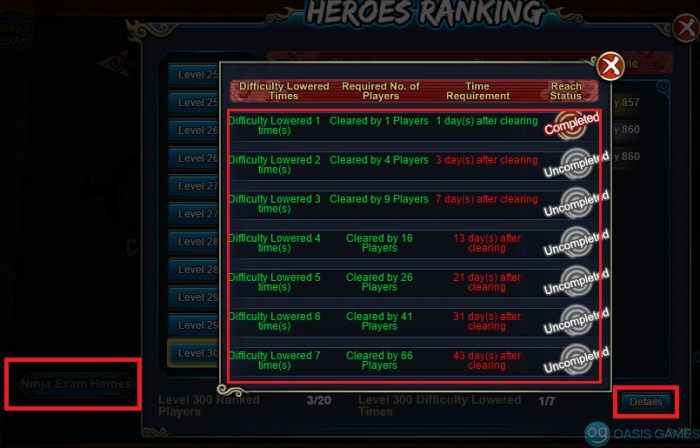 sorry, but it does not even remotely come close to grant a win at my power (216k).

your power, very likely, is the very very minimum to barely think to have a chance to win in 1/100 tries.

at my power is absolutely impossible with this lineup.

because is impossible to avoid that all the clones die before edo tobirama moves.

once tobirama moves is, de facto, granted that he will select wind main and trigger knockdown + immobile if wind main is behind kisame.

maybe there's a slight chance with it, but with wind main no. At least not at my power.

it worked with earth main, but not with 4th mystery, as i thought initially, but with 2nd mystery (due to damage + shields at the same time).

distribution on the field:

mandatory that konan has move 1 gear (over 10k initiative) and kisame move 2 one. 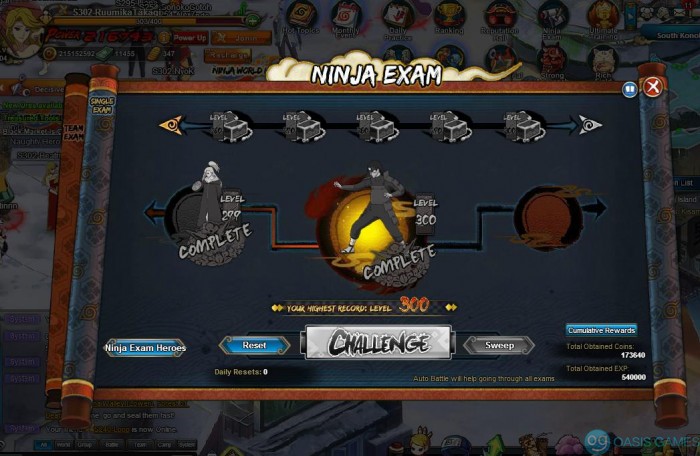 the key factor was to bring back gaara barrier before the 1st stage enemies were dead (so the barrier was up in the 2nd stage making his damaging mystery available too).

at that point, was enough that edo hashi 30 chase didn't select earth main to lead to the victory (i used mystery and i gained shields + katsuyu removed immobile and i delivered damage to hashirama. at that point i used konan mystery and after kisame gave chakra thanks to hashi defeat and then I used gaara mystery too).

after round 1 only edo tobirama and edo hiruzen were left alive at very low hp. standard attacks in the following two rounds killed them.

P.S. make sure to wait for katsuyu and 2nd mystery to be both available before the 2nd stage comes in play, since katsuyu has cd 3 while 2nd mystery had cd 2.

for 299 i used the following (found in a chinese youtube video).

fu is full skillbroken on mystery and puppets (the one in the video had y skill trials for mysteries, but works the same even with normal skillbreaks).

the user in the video used jonin minato with bonds in the place of hokage minato, but hokage imho works better there (since makes the team more tanky and stacks regardless what happens).

the main trick is that you have to retreat if one of the following things happens: hidan mystery selects your main, konan doesn't get chaosed by fu's puppet, hidan (that you will target with fu mystery) won't get chaosed (so if you control fail on him).