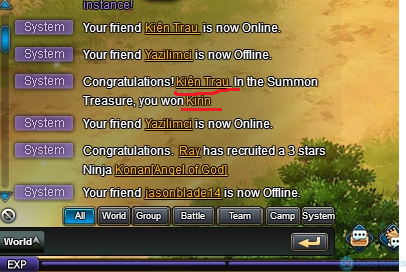 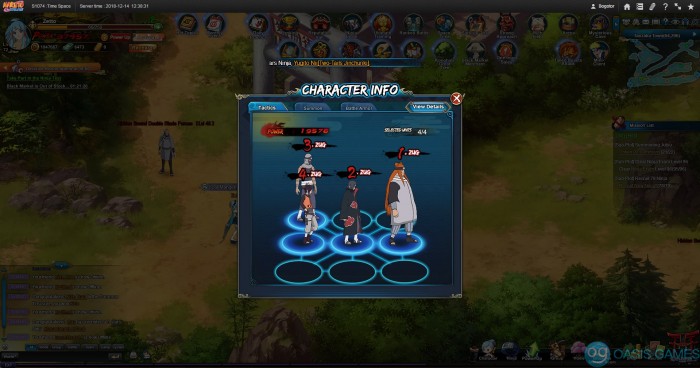 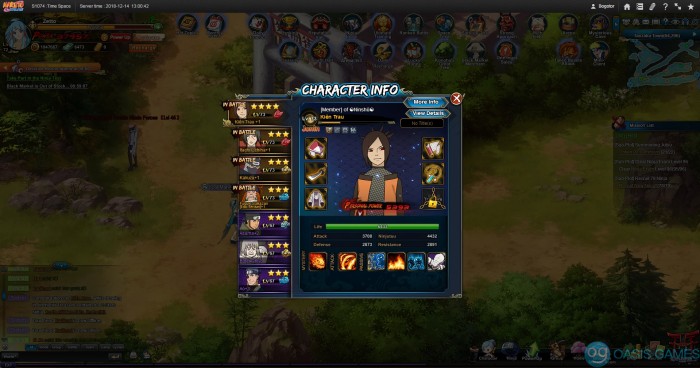 As you can see,he got Kirin,and i doubt he use more than 100 scrolls

Game is tend to give good stuff for low power free players. Ninjas from "RNG" events super rare summons etc. its a way to make them recharge so those rewards maybe worth something :D

That's total bull*. I've had like 3 free to play accounts and I have never ever gotten anything from the RNG events on them. You may think so only because 90% of the servers are always filled with low power players and it doesn't matter if a single person spin 200 times on the lucky wheel when a server of 1000 players spins one time and someone from those 1000 gets something. At the end of the day it doesn't matter if a single person spins however many times because even he can't compete with the total server population and how many times each of them are able to spin. That's why these f2p or low spenders give you the illsusion that they win more - because in total they actually spin more than the spenders and thus the likelyhood of them getting a reward is greater.

As for OP, you're kidding yourself if you think a person with 40k battle power only pulled 100 times from the summoning treasure. Hell, depending on how old his account is, he could possibly get Kirin from only free pulls, let alone the added summon scroll pulls that he did, as well. The game has a fixed chance, you can't get Kirin or the KOH before he hits the necessary number of scrolls. If it was otherwise, plenty of others would have gotten the rares, as well. That's like saying someone got Madara for 60 scrolls, the game doesn't work like that no matter if you're f2p or p2w.

bro well its just a theory but u will get a super rare reward from an rng if u spend 8000 or less coupons in an event consecutively like suppose firstly i spent in lucky wheel like 2000 then few weeks later u again spend 2000 on lucky wheel ............like this if u never got lucky in an event like lucky wheel try your luck on it like that

Player who get Kirin is 19k,and server is 2 and half months old.So my assumption he use no more than 100 scrolls is corect.Also,this is not complain post,I just want to show that super luck exist,I see it with my own eyes.

Congrats to the player who got the Kirin! That is really super lucky.

It definitely is possible in every draw to obtain the Super Rare in the respective treasure, it just is very rare.

Wont derail your thread, or go into too much detail, since this will probably be removed for "spreading misinformation" anyway, plus since im not Aristeaus my examples would be anecdotal at best, but I can share that from near as makes no difference 2 years of playing, sharing a server with some of the biggest spenders in the whole region, aswell as spending more on this company than I care to admit the above quote is absolutely true.

one guy from our server also got kirin , around 2 months ago . That time server age was abt 1.5 months.

And he got from free draw . Power around 12k when all others were around 20k.

Everybody has separate treasure counter.

I bought Kirin, because I thought surely it does extra damage. Otherwise there would be no reason for it to be 12000 points to buy. But, no it is same any other yellow summons. I was upset for a week, and then I got KoH on a free draw. :)

actually, he was extremely unlucky.

because means his counter reset, so he won't get koh before the next 1800 rolls, so he will be compelled to buy it with summon points and koh is more expensive than kirin.

Actually, in most cases, he is extremely lucky, unless he spent a fair amount of summoning scrolls into Summon Treasure.

We don't know exactly the situation of course. However, it is in my opinion that he probably did not use a lot of Summoning Scrolls to obtain Super Rare for Summon Treasure. Having Kirin summon at around 20k power is quite impressive xD

It is definentally possible to get the summon before you hit a certain amount, one of my group members got Kirin as their first gold summon lol