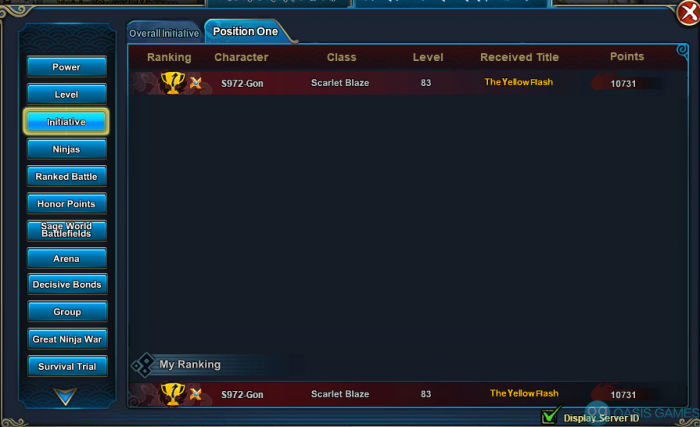 Just an idea I had this morning. It's probably been asked for before but I was bored. My paint skills aren't that good but at least it conveys my meaning. An Initiative ranking would be cool, don't you guys think?

People gotta stop being lazy. Tracking your opponents is also a part of the game.

Right, then they should remove all of the other rankings too. Because... we wouldn't want everyone to be even more lazy. Lol. It's not about laziness it's about convenience. Also a new title would be really cool.

Just said a simple suggestion and someone already called you lazy. Feelsbadman

Not trying to be dismissive of your suggestion, apologies if I dont word this well and come off that way.

But would it really be necessary? the biggest spenders, the guys with the most power are the ones with the highest ini anyway. Sure a very, very small number of smart and/or patient f2p could be relatively high there but in general the ini ranking would be near as makes no difference identical to the power one

It could be useful, if you are in the top percent of players in your server so having a way to keep an eye on other powerhouses ini would be a nice tool, and more titles forever out of the reach of people who aren't rich, but for the majority of players I doubt it would make any difference to be honest

Fair enough. Though, this idea would more benefit the newer servers. We definitely aren't on a shortage of those lol.

Edit: To put this in perspective I have the highest initiative on my server yet I'm 5th on the power ranks. And that's not really rare when it comes to my server. You have people in the power ranks below 40th but are in the top 10 for initiative.

I was asked to do this in addition to the power ranking lists i try to keep updated. But too many people either log off in their nine tails teams or purposefully try to hide their gear before logging off so it would be too difficult to keep accurate.

And to the people who hide their gear all you have to do is log onto their server during Sage or GNW and examine them then....so you're only making it slightly more difficult to find out your true gear scores. Still too much of a hassle to do for a top 10 or 20 list though.

I get your point why you want to see, so you can regularly check on someone's.

But is that Pos 1 or total though.

My answer is NO. I don't see any "improvement" from it. Sorry. There are other things that i want in the game more than Initiative ranking.

So...what you are saying is: the hiding works? xD

During space-time you cannot see, not even by being in their server, the stats of a challenger.