You'll end up regretting getting 6 paths naruto as Kurama Naruto DOES get Bond mystery with Edo Minato.

How likely is this though? in either case you need to buy an event only character and the consensus seems to be that 6p naruto is the better of these 2.

Is kurama's bond good enough to warrant ignoring 6p while spending to get edo minato?

if u already got naruto kurama, avoid buying naruto six path at all cost. Its not worth it.

Naruto kurama damage mystery is still op than six path version since the kurama one has repulse effect that give nice additional bonus damage to opponents entire team. 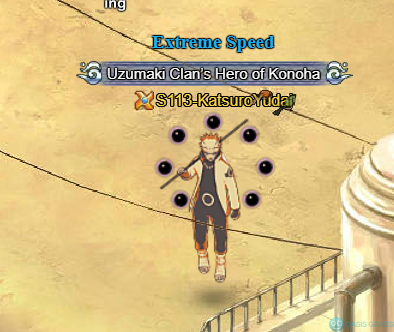 I have about 2.3k lucky wheel points. Should I just go for power then if that's the case?

it seems this new naruto isn't really good, or is underperforming as per some users who have tried it. i'm guessing this event isnt a good investment to get naruto six paths?

6 paths naruto is essentially a kcm naruto retrained for 3v3s. His kit is fairly nice for 3v3s, being able to interrupt stuff across multiple teams.

In terms of 1v1s, he is not all that different from kcm naruto, in that his damage output as a slot 1 ininja is awful to compensate for mystery every round while being immune to status.

Something that people don't really understand is the importance of his healing. If he manages to survive to round 2, he will basically heal back to full HP thanks to his rage mode.

Just so you know what his bond mystery does, with 30% more damage with interrupt, its generally a lot better than 6 paths.

The only thing that 6 paths has over Kurama is the Leech he gains and hitting through 3 fields. But Kurama Naruto will be hitting harder inherently.

I'd also say his standard is a bit better. Kurama's standard attack advantages are that it can start chases and ignite, and has a little bonus repulse damage, and both tai+nin, but six paths hits 3 people. I didn't do much testing, so I definitely could be wrong, but from what little testing I did do, I believe six paths' standard single target damage is the same as kurama's, but he hits 3 people, so almost triple damage. Only reason it's not triple damage is if kurama does repulse, or ignite (again, didn't do much testing, so maybe I'm wrong about the damage, will do some more testing later). And since most people stack their pos 1, and neglect pos 2-4, six paths' standard can hurt pretty badly. Tested him out against people faster and 20k higher bp than me, and his 2 standards (used bee) demolished their back row.

I'd also say another advantage six paths has is not having to chase to increase his combo rate, and therefore reset mystery. I can't tell you how many times I've targeted someone with kurama to immobile them, but they die from the mystery itself (one of the few times getting a critical hit might be bad), and kurama doesn't increase his combo rate and reset. Not to mention, having a han in front of six paths won't take away your chances of resetting, like it does for kurama.

if u wanna the best ninja, wait madara 10 tails. His damage output is op. One of the biggest damage beside edo deidara