Can't say this wasn't expected. Most people got 20 packs, we get 5. Called it day one. Such an utter disappointment. 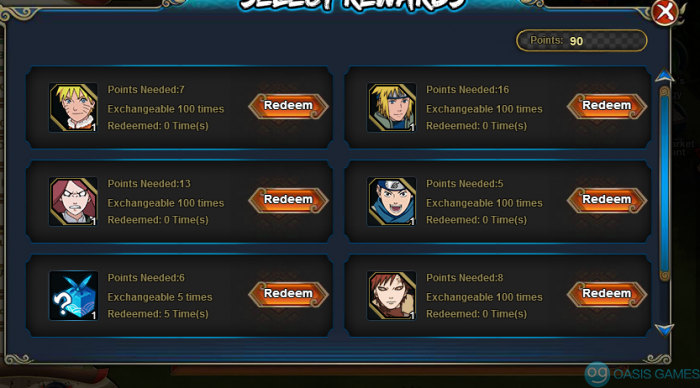 Hi! It seems that those who have claimed the Special Pack containing Sasuke and Sakura fragments in the Naruto's event last week are not able to claim the packs this week due to the limit placed. Also, the specific event code for the Special Pack is coded in a way, where if you bought any purification runes before packs appeared again, system will think you already bought 5 packs. This means that if you bought purification packs, you are not able to redeem the "Special Ninja Pouch" anymore. Due to this reason, we will be bringing back the pack again in the future with similar price, which will give a chance to players that were not able to claim packs this time to obtain them in the future.

Please do accept our sincere apology for this situation. We will try to bring this pouch back as soon as possible.

Jib Note: I will be closing this thread as it has gotten out of hand. However, if you have any questions, please feel free to contact any of the moderators including myself. We are usually available in private message, forum, and Discord.

true, but thats a change that was intentional and came with updates to the entire game, everyone can take advantage of that

the topic this thread is all about is a one time chance that a lot of people missed ,that came about due to company error, which they then handled about as badly as you possibly could

dude do u know how much it cost to get tendo back when its 1.0 yeah no craps dude,u need to buy seal scrolls that thing ain't cheap. guess now? its a free ninja.. just pass ultimate training.

The problem is that a game that is already woefully unbalanced was just handled in such a poor manner than people got 2 very useful characters to 5 star and stocked up enough to break through their skills as soon as they are released, whereas the people not lucky enough to log in early that one morning would need to spend literally hundreds of pounds for the same thing.

That on its own is pathetic, the fact that oasis handled it in a manner that punishes the players for their own incompetence makes it even more so.

as said above characters are extortionately overpriced here, you need to take out a second mortgage to buy 1 single character in most cases. If the company messed up throwing out characters, they should at least make an effort to balance that scale, giving players the opportunity to redeem a tiny fraction of the reward aswell as issuing "compensation" to all players regardless of whether they are ones who missed out or not, does absolutely nothing to address the actual imbalance issue, its a very poor attempt at hush money at best....... and all this is without even mentioning the broken sakura gift event with a bug that prevents some of us from doing the event for all 7 days, yet again "compensation" is given to everyone meaning people without the bug get a huge advantage again through no fault of the players, it is entirely down to a companies sloppy work, this is twice now said event has been broken for me personally from day 1 (not sure why that last part is weirdly formatted)

then how about people who buy this ninja using ingots before this bug happening?

Oasis should nerf sakura cloak because I face them in sage and matsuri as cancer teams. They are too hard to kill 5 stars and get cheater wins

well surely working under cross hair from both ur boss and ur clients ain't nice at all. and surely when u are not on right mood and right mind when u were busy reading complains like these...not a 100% sure but yeah depend on the human some just shake this like nothing some does make it matter and since i didnt know the dev personally lets assume the worse. and yes people with stress tend to be un focus which can lead to next another mistake like that purified craps.

u should post on bug bro.that way its process more faster than on this thread

This is the funniest image I've seen all week on this matter, legend.

For sure it will get deleted for Inciting Drama.

yes it is, i can take a picture of sakura or sasuke in my ninjas and they will be in grey color ( i dont have them)

and picture to the event and it says you reedemed it 12 times, and i dont even have them

To be honest I think what was intended from the start was to give a pack with only one fragment, since many people were asking for Cloak Sakura to be redeemable (the original 80 frags pack is purple, this one is blue which means that it should be of lower value). But someone screwed it hard lol. Incompetent devs? Accidental mistake? Anyway, in the end it is the players who have to pay for it.

I'm just glad that the ninja aren't that great. Sure they are useful, but they have limited use and don't fit in many teams. We got a new, supposedly better Sakura coming soon, so Cloak will eventually be only used by the f2p and alts. Sasuke isnt used that much anyway so he isn't a problem. I only hope that these two ninja won't get a breakthrough any time soon, or at all, so that the people who redeemed 100 or 50 or 20 packs won't have an even bigger advantage.

Ok, this one if true is indeed a serious issue.

Honestly speaking many of the people i see here just complain for no reason.

They reduced the cap to 5 and didn't reset the counter.

It's perfectly fine to me.

Who abused of this in day one cannot get another 5 packs and who didn't abuse it still get 1 free 5 star or two free 4 star characters. Where is the problem? If you do not understand that this 'compensation' is very acceptable you have a problem here and sincerely speaks here one of the players that had no problems in leading crusades against oasis when was needed (and i was also banned multiple times from the forum for it in the past).

i cant reedem the pack bcuz it says you reedemed it 12 times, and i didnt reedem it even one time

yesterday i reedemed 12 purify runes, therefor it says you reedemed the pack 12 times -_-

now i dont can reedem it bcuz the * purify runes

It is just bull that everyone who got to take advantage of the pack got so many redeems and all we get is 5? They claimed it was an intended gift, and then retracted it when they saw they screwed up! This is atrocious! It is unprofessional! Oasis should have done much better. This is crap!

New Feature ! not sure they will work on that faster even without complain.As u see this past month what they declare on v5 still the same as before.

What i care the most beside 5 staring sakura and sasuke is there some player that exploit it. So i want some too. Its not bad to have some extra 5* star ninja and its make me not fall out from competition.

With 5 star + frag for BT it will give me more choice in the future.

I will have mroe choice on control ninja or buff and clear imune ninja. Whats bad about it event i am not sure i will use it later anyway but its sure better RIGHT ?

The one who decided 100 redeemable was "intended" was teh real screw up.

Oasis likely only want to give 1 redeemable in the first place.

But the programmer was thinking in dollars and cents for some reason.

And he still forget to add a dot. It's suppose to be 1.00 redeemable.

Now, some of us are lucky, some so lucky, and a bunch of people still cursing how could this have happen?