This might be the final time I will EVER post in this section. It was fun, but, I have my reasons. THanks for the readers who stuck by. it was very much appreciated :)

Haruki looked at the corpse of Danzo. Armless, face down, and covered in his own pool of blood. Besides him stood Sasuke, a grin of satisfcation plastered on his face. The brunette Uchiha had a myriad of feelings swimming through him; regret, happines, satisfaction and conflict.

But for now, those didn't matter. What did, however, was the opportunity presented to him. Sasuke was weakened and vulnerable. He and him were the last Uchihas, but Sasuke was a threat to Konoha. While yes, he helped killed the Hokage, but Danzo was a corrupted b*stard that deserved to be put down.

Sasuke noticed Haruki's gaze, as if trying to melt him down like a candle. The raven-haired male lost the ex

Before a word could be uttered, a red chakra construct of an arm materialized by Haruki's side and smacked Sasuke into one of the pillars. The former heir grunted, pushing himself off the pillar. He looked at Haruki, his ex

Haruki didn't say a word. The arm construct was soon accompanied by a humanoid body, resembling one in armor. It held out its arm, a long spear appearing. it grabbed hold of it and aimed it at Sasuke.

"I've told you, Sasuke. Once Danzo dies, it's back to old pleasentries. Burn out!"

Blood leaked out from Haruki's eyes as black flames erupted from below Sasuke. Luckily for him, he managed to evade before it could reach him. Sasuke landed on to a pillar and glared at the Konoha-nin.

"Fine! If you want to side with that pathetic village, then so be it!" Sasuke circled through a set of hand seals and spewed out a giant fireball. "Katon: Gokakyuu no Jutsu!"

Haruki grunted. Three giant shields materialized out of thin air and blocked the fire jutsu. He raised up his hand, his Susanoo following its motion. Haruki roared and threw his hand, the chakra construct throwing the spear.

Sasuke looked up and his eyes widened. Dozens of spears began to rain down like a storm, all descending to impale him. The raven-haired male nimbly dodge each one, jumping out of the way a second before it reaches him.

As the last spear neared him, Sasuke got an idea. He shifted his Sharingan into its Mangekyo form, summoning his Susanoo's arm. It reached out and caught the spear, much to Haruki's surprise. Sasuke grunted, and the spear burst into flames. With a cry, he threw back the spear to sender.

Haruki brought up his shields once more and blocked the Amaterasu-covered spear. The spear pierced through the shield, almost inces away from Haruki's face. The burnette frowned and pulled off the spear, throwing it to the side.

The two Uchihas glared at each other, Sasuke slowly starting to be shrouded by his own purple Susanoo. They brought up their hands and started blurring, performing hand seals. Both of them tried to outspeed the other, wanting to finish their set before the other did. None finished faster, they finished at the same time, both in the Tiger seal.

The usual orange fireball was accompanied by a black shroud, signifying the use of Amaterasu. The two clashed and exploded, sitrring up some smoke and dust that would've blocked a regular shinobi's vision. Luckily for Haruki and Sasuke, they had Sharingans.

Haruki took the initiative and performed another jutsu. His Susanoo disppeared and he jumped out towards his fellow Uchiha.

Haruki breathed in deeply, right before sighing and spewing out six b@lls of lava, all quickly cooling down into molten boulders. Sasuke's eyes widened and stumbled when the jutsus hit.

Fire erupted around the loyal Konoha-nin, spinning around in a spiral-like manner. Haruki grunted and made a pushing motion, the flames following it, and quickly bulleted towards Sasuke.

The traitorous shinobi crossed his arms and braced for impact. The jutsu pushed them back a couple of feet, but luckily didn't manage to *e the chakra construct. Sasuke panted, feeling his chakra getting lower and lower.

Haruki closed his eyes, concentrating as he kneaded the chakra in his body and performed the necessary hand seal to perform the jutsu in mind. Sasuke narrowed his eyes and didnt want to take any chances. His left eye bled, a blade shaped out from the flames of Amaterasu forming in its left hand.

The Susanoo swung back, right before slamming down the flaming construct down on Haruki. The burnette managed to dodge at the last second and spewed out a literal sea of flames.

Sasuke gritted his teeth and channeled more of his chakra to further fortify his defense, Haruki did not falter, and instead more chakra, intensifying the flames. Sasuke didn't last long and was flung back, feeling his Susanoo dissipate and leave him vulnerable.

Haruki ceased his jutsu and smirked. He disappeared in a blur, right before reappearing in front of Sasuke. He grabbed his traitorous clansmate and forced him to stare directly as his eyes.

"This isn't your first time experiencing this, so let's just get started."

Dozens upon dozens of Harukis appeared out of nowhere, all holding some type of sharp weaponry. They all approached upon Sasuke, who could do nothing but bear with the pain.

For him, it felt like days. But in reality, it was but a mere three seconds. Both Sasuke and Haruki gasped as they fell to their knees, the former experiencing mental exhaustion and phantom pain, while the latter felt his eye sight dull even further.

Haruki shakily stood up, starting to pant. His eye bled, and the area surrounded him burst into black flames. "Amaterasu!"

Sasuke quickly reacted and re-erected back his Susanoo, protecting him from the inextinguishable flames. Haruki staggered, everything around him starting to become nothing but a mere blur. He gritted his teeth as the flames ceased, showing an equally panting Sasuke.

Haruki performed three familiar hand seals and clutched his right wrist, lightning starting to crackle from his hand. Sasuke grunted and did the same, but with his left hand. The two stared at each other and charged with a roar.

Who will win? Who will be the victor? The loyal shinobi? Or the one who walks the path of no return?

The two met in the middle, clashing their respective jutsus with one another.

Haruki and Sasuke gritted their teeth as they pushed back, fighting for dominance. Neither wanted to give up, and give the other the necessary push to win. Haruki gasped, as he felt himself for a mere second.

It was the exact thing Sasuke needed. He managed to win their clash and repared to plunge the jutsu in Haruki's chest. Before the finishing bl*w could be delivered, a third party cut in and caught Sasuke's hand.

The Uchiha looked surprised, seeing a certain white-haired shinobi looking at him with an impassive glare.

"Sasuke. This time, you fall."

Fuyuko, Aimi and Daichi dropped down from behind, the former qucikly rushing towards Haruki. The other two walked up to stand beside Mangetsu, looking at the raven-haired Uchiha with clear hatred.

"This is the end of the line for you, Sasuke!" declared Aimi.

"That's right! No matter what happens, it's over for you!" shouted Daichi.

Sasuke merely laughed out madly, clearly having become insane. "As if the three of you can beat me! I'm an Uchiha, I've no equals!"

Mangetsu unsheathed his blade and pointed it right at Sasuke. "Then let's put that to the test."

Suddenly, lightning crackled and sparked out from Mangetsu. Daichi crossed his hands into the Ram seal, covering himself in a thick layer of earth. Aimi unfurled her fan, her eyes becoming orange with a diagonal line replacing her pupils.

Sasuke's shoulder sho0k as he looked down, a clear indication of his madness. He looked at his three former friends and charged at them with insane glee.

"sasuke merely laughed out madly, clearly having become insane. "As if the three of you can beat me! I'm an Uchiha, I've no equals!"

Say it again in front of Naruto and he will be like: 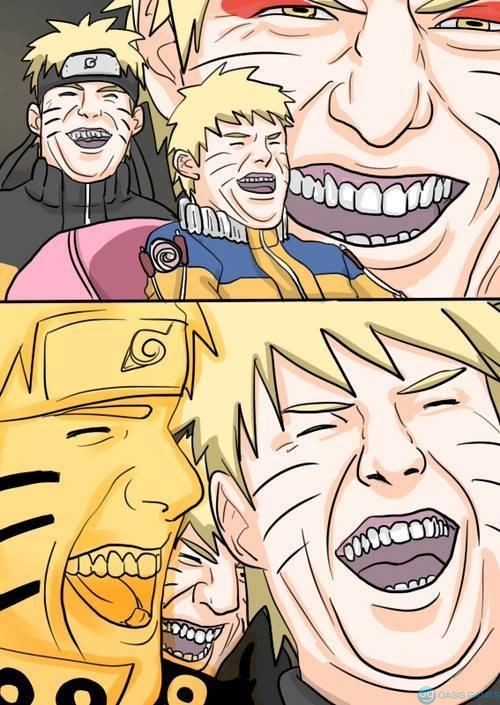