please nerf shisui. I want quit oredi. I have no shisui I am sure you make the game great again.

I know shisui is strongest in lore bla bla, but fun game is more important.

well an ez way to beat him is to remove buff/shields/barrier eventually more counters to him will get released n b4 u know it he'll be as useless as kimimaro :3

If you understand how his kit works, you'll know he'll never be "Useless".
He'll be relevant for most likely a long time- even if Ninjas come that specifically counter him just due to how overloaded his kit is.

Ninjas that counter "Specific" ninjas, never completely stop something that's being used because they over price the crap out of it so only a small portion of the player ba

There's also no draft system when fighting other players, so you choose "Best possible scenario" set-ups.

even if my kakuzu is breakthrough I am not even sure if I can win him with shisui + mm, my ag konan is useless against 100% resistance. breakthrough kakuzu + agk cannot even win against shisui +mm gg

Your joking right? SB EG Kakuzu is a beast. Almost everyone not using shisui in CN now.

1. Shisui's balanced. Buff removals stop shisui teams that use him as a pos1, his health is relativly low, and his mystery has a 3 round cooldown.

2. Almost every team has a counter. Just because a shisui team stopped your agk team doesn't mean he's like some god ninja. He's just a counter to your team, that's all.

Maybe you just dont know how to use your team .. I've been using Wind with AGK, KazeGaara and Gakido for a long time now, and i dont have any problems facing Shisui Teams (UchihaTeam or Shisui-Kushina) ..

Can you show me that team against Shisui Team? I mean lineup 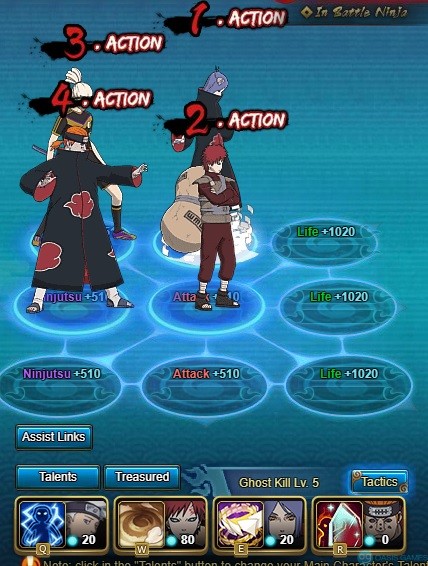 If I only had AKonan

a trick to fight pos1 shisui with lower or higher initiative than you is to use ninja with reflect.

Fire main
kurenai
One of the pain

You either wait for their shisui to fire first if they have pos1 init over you, or you fire first to cc 1 of their other ninja. Their shisui will not cast mastery if you have reflect active. But to completely counter root lm team with shisui+itachi, you kind of need some buff removal ninja as well or else that double hit from shisui and itachi will wear your team down fast.

Change to sage naruto. The old wind gaara sage and gakido team. If ur faster then u can beat dodge team. Kill their main first; use naruto mystery and gaara mystery round 2, then refresh for round 3. Shisui cant control anyone cause of impetus and gakido shield.

Yo, I have a question. There's a guy in my server using jonin minato, masked man, fire main with sealing jutsu and shisui. Basically, he uses madara kage on my AGK after her standart and sealing jutsu on gakido. So, I can't AGK round 2 and can't use gakido to remove debuff from her. Then he uses shisui on my main and I can't even dance of impetus... By this time my whole team is almost dead, even tho I have barrier advantage. What to do?

Should I just go for masked man aswell, since it's so op? The masked man is actually being more annoying than the shisui. Not to mention that he has 3 dodge ninjas, so even when I get to use AGK... Well, I get nothing from it.

hem, so the arguement is if we dont have shisui we should nerf him?

or the logic that shisui are not meant for a f2p, except u r so very lucky pulling him for a 400 coupons or whatever. then, if he's not that uselful then whats the point people "buy" him or any good ninjas from A-SS or even SSS rank for this matter. and also im a f2p and also didnt have shisui...his kits somewhat does make sense however i cant say the same thing about some silly ninja like minato. hense if u looking the lore then jonin minato should not be stronger or better than the 4th hokage version(since this dude a kage level far from his jonin carrier) or kurama mode minato compare to the lowest version of minato, i mean what if a ninja like kurama naruto is less powerful than normal naruto than its absurd. or C-Z class ninjas that no one will ever play em like sound 4(except sakon maybe after he get skill broken), anko, shino,even kimimaru with skill broken skill lame or any ninja on that class... cmon... they also need the love of buffs. peace

To counter you need someone like Samehada with good init on your pos 2. To seal off all mystery round 1, then you can attack round 2.

You probably would target Fire main anyway, since all of them have dodge.

If he's smart, he would save his Masked Man for round 2 to shut down your Main and Gakido for 1 round.

BUT don't be panic, be patient and wait to turn for next round.

Another way is you have very very very good control, hoping for control failed, which it can happen, if that masked man failed to immobile your Konan round 1.

Angel Konan's mystery cannot be dodge, but your chase would fail. The real issue you are facing is "dodge" ninjas.

They are quite a headache, which is why kakashi ssn is actually a v big me

And I could feel why many question oasis's release of such a ninja so quickly.

It's almost like when the long awaited op-ness of jonin minato bond finally came, they throw in a counter me

If you had him, dodge ninjas would be paper, more so when debuffs/interrupts could work with 1 hit.

However, don't think many will go for kks ssn.. yet anyways.. some already mention to not get him. (since there are many other ninjas to aim for)

Anyways I find this shake up is actually pretty interesting. Many variety of me

Of course, as usual I'm excluding mega whales XD, they already have plenty of other ninja options anyways.

To keep in mind. To play Susano Kakashi will give you limited ninjas to play. He only gives buffs to Konoha.

For some players who have invested on Ninjas like Konan, they would rather continue to use her.

Konan deals insane amount of damage anyway. As long as she got to use her mystery You should be fine.

My friend plays ninjas like Shisui and Minato, is scared of her to 1 shot through dodge.

oh sorry, I was just contemplating incoming changes in trend in my last post rather than your issue.

Imo, in your case, you may get sharky or madara 5 kage summit to replace garra on position 2.

that way you can seal round 1 mystery of fire main, maskman if they are position 3, 4 plus remove barrier of shisui.

personally i think sharky has more synergy.. especially if you can trigger 20 chase.. with round 2 Angel Konan mystery.