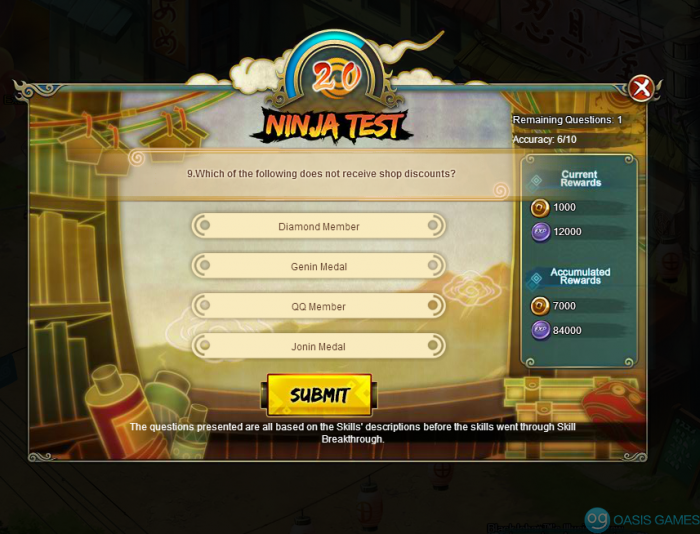 And for reference, I guessed Jonin Medal and it said it was wrong......soooooo.....we are SUPPOSED to get a medal discount in shops. I remember something about that too......so what happened to that, eh? XD

the correct answer is genin btw.

we don't have QQ members, diamond members here either, so i don't really think this supposed jonin medal discount is a guaranteed thing in future english versions.

although it's true that the other 3 options do have discounted prices in the chinese servers in the in-game shop.

I distinctly remember talk about this mid 3.0 release. We were supposed to get this, but then people speculated that it was probably pushed to 4.0, etc. But this just further goes against the, "We aren't like other regions" but then this is just a copy/translate of those said versions that we aren't copying. kinda makes you go: @_@

I don't really understand why when it comes to releasing free stuff or "discounts" that they have to be so opposed to it. Do we really have to pay more than others? That is just cruel.

Edit: i'm so completely incoherent when im in a rush jfc. ok i'm going to try to rephrase all of this to make it more structured lel

A better way to approach these different versions (particularly the chinese and german versions), is to take them simply as guidelines for what we might expect in the future. ninja designs, power systems. Comparing and scrutinizing every detail and just futile

2. "that's just cruel": well, it's completely ridiculous that players complain about oasis being unfair, while holding them to double standards regarding the game.

And then, you complain that the global version just isn't the same as the chinese version.

You say: oh germany has angel konan and new clothes, and new treasures

Then you say: please oasis don't give us % tactics like they have in germany

Then you complain about the game being different

Do you see where i'm coming from?

4. the jonin medal discount: i genuinely do not know if there will be jonin medal discounts in our version. there might have been talk of it happening sure. there's always a lot of talk. sometimes these are rumours spread by misinformed people, sometimes they're actually accurate. I said i woudn't bank on it being a guaranteed thing because i don't know where all this 'talk' came from. You can continue to speculate, or you can ask the mods. (disclaimer, they also might not know)

You are mixing apples to oranges content. I'm directly pertaining to COST and what Oasis charges us.

Guren was a free ninja. The three Sannin were supposed to be introduced through an event where you can PICK one for free. We had to pay for ours. Ninjas and items here are priced HIGHER on average than any other version. These are the instances I'm referring too.

Do you understand why people are complaining? Because nothing is ever really explained to the playerba

But we still go back to my original point of....they don't include the player community with their decisions or offer explanations as to the decisions that they made. They tried to with the 3.0 and released a road map....but that was quickly taken down due to the fact that stuff wasn't getting implemented when it said on their own road map that they posted. I remember this specifically. Since then, they never did it again and kept their decisions to themselves.....only telling us after the fact.

I would like to know why we, in our region, are having to pay for more. Why are ninjas being rushed so fast compared to other content (such as the latest bee...that was only introduced in China 4+ months ago!) and why ninjas such as 5k Madara are 2.5x more expensive than anywhere else. I would like SOME explanation other than, "We aren't other regions......except when we just copy/paste content from said regions that we aren't."

1. guren is free...you don't have to pay a single coupons or ingot to redeem her.

3. my point about complaining had nothing to do with oasis' explanation to the player ba

4. your original point wasnt "they don't include the player ba

like, yes, there are a lot of things that can be improved on. i agree that oasis could be more open about their decisions and potential changes to the game, i'm equally concerned about the rushed content. I just don't think scrutinizing versions is a good way to open that topic.

Regarding your question from Ninja Test. All existing questions from mother version (CN version) were translated to English (with exception of few that are currently bugged). That includes this specific question and its ties to only China (for now) feature that other versions do not have. Correct answer would be Genin Medal. CN version works completely on different system and registration system. In order to be able to play CN version you need QQ account. You are also limited for how long you can play the game each day because of the Chinese law. There are systems also connected to your VIP level. Our version currently has no plans or schedules to implement any kind of VIP system. If we will have such plans, we will make sure to inform players.

I will note this question down and ask if we can disable it so it won't cause anymore problems or confusion.

Guren - She may have been implemented to the game differently in another version but that doesn't mean it has to be like that for us as well. Seasonal System was implemented in CN version several months ago and we only plan to implement this feature. We are trying to fulfill the biggest dream or more like request from your players and that is - be on same level as CN (or at least similar one). We are not denying nor confirming that there is possibility Guren might appear in this system. But if she will and other ninjas as well, it means this specific feature will be several months behind CN and it might also create trouble for us to bring faster updates for you. Everything has its exact process. Guren's price is not that high and she is more for collection purpose. She is not game-changing ninja. She indeed is very interesting ninja and she's some special things to her kit.

Discount shop - I do not know from where you got such information that we were supposed to get discount shop (I don't even think it was on our schedule). Could you please explain this to me? It is true that CN has it but it does not mean we will also get it.

Other versions and why they have features we do not have - Only feature that we are missing from versions that are published by Oasis Games is % tactics. We believe, as our whole operation team, that this feature is not healthy for the game and we do not plan to add it to the game. Final word is always up to developers of the game but we are in very close contact and we keep discussing such updates and things with them on weekly basis. We once announced that we are adding % tactics but feedback was not that good, it was very negative. So for now, it is a no for % tactics.

As for specific features only for CN version. We can't have them because of the system differences. It would require system changes and updates and we currently do not have such plans. We are not completely scratching this idea but it is very unlikely.

Free Sannin Pack - Where exactly was it stated that you were supposed to get one for free? We never announced or promised such thing. I am sorry.

5 Kage Summit Madara - His price is same as for CN version, if not cheaper at some occasions. Same goes to 8 tails jinchuriki Bee. His release price was 10k (around that price).

we want free guren. Thats all. Dont MONETIZE all the free stuffs oasis staffs. The next free ninja must not be monetized again eg; sannin era ninja (one of the trio),hanabi, chiriku, naruto ramen, samui swimsuit, ino summer , shizuka