What determines who will go through the X-war? Is it the 1st and 2nd place in the local war in case of servers merged twice or some other unfathomable basis? (at least to us~) XD

He wish to remain anonymous

Ah, "he", so nevermind .. And i think i know him, someone in discord ask the same thing as yours last time ..

Anyways, what matters for qualification are the Ranking and the Overall Group Power .. In your case, and this is only my assumption so don't take my word for it as i may wrong about this .. Your server is already merged twice, but the system or the game still picks and registers group as they were before .. I mean by 1st merged groups .. so in that case, maybe that's why them and yours got into Cross-Server Great Ninja War at the same week .. since this is the only theory or assumption i see as possible or viable for the scenario you gave ..

Thanks for answering despite being demotivated lol. We are still waiting for the invites. Guess we just have to wait.

Are you playing from HK servers, if yes then you should've gotten the invitation already .. We always receive our invitation minutes before or after 23:59 server time .. 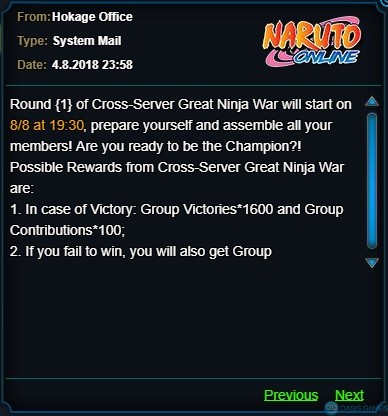 Ohhhh ic.. Too much spam on the mail couldnt check last week's invite. Seems only one group in our server made it to the cut this time around.

I see, Goodluck next time ..

Just sharing, we always get into Cross-Server Great Ninja Wars every 2nd and 4th week of the month .. And that's because my group is the only surviving group of our merged server plus we never and didn't kicked our members, we have 108~110/110 members and only 26 to 30 of them are still playing, the rest are long dead and never came back for almost half a year now .. That's why we're 2nd with highest power in our xGNW cluster i think xD .. haha

I hope we get 2nd merge too sooner or later for us to have some excitement again ..

Hmmm bp does seem to be their problem... Be careful what you wish for lol. You might see that 30 slide down to 10

Alot of HK players is a quitter tho cant help that if you cant participate on x gnw hahahahha. I even have 5 servers now and i assure why i keep making new accs because of inactivitiy of group and servers hahahahah

Actually it is not, the only problem is the people like you who quits and make another character on newer server .. And now asking why they keep making new servers while the older ones are being dead servers when at the first place, you guys are the ones who makes your graves deeper .. First of all, those old servers will not die totally if you guys keep playing on that server, I myself is still playing on my very first server and my group is able to compete at Cross-Server Great Ninja War .. We have a good relationship with each other of my members eventho we are the remaining last Group active in our server .. We have nothing to complain but we are requesting to have a 2nd merge and we are patiently waiting for that to happen ..

The problem with players is that, they wants to get the top power above all the players in the new servers, wants to have their own Group and be the Group Leader and wants to dominate the whole server .. But the problem is they don't know the reality when it comes to this matter that no matter what you do, those spenders will stay and keep in the highest ranks .. The Group Leader quits, its members begins to fall, without someone that will stand-up and bring their members together again, the group will totally die ..

About this topic or the thread, they cant participate because of some cir*stances and not because their server is dead .. They just got 2nd merge and you should know that if you read our whole conversation ..