1. I realized that both edo yugito and han have same mystery. Removes debuff and shields to buff sides and use again then damage enemy team. Which is better, edo yugito or han?

2. They already released edo roshi, edo yagura and now edo yugito. The trend here is like releasing edo han or edo fuu next, so maybe we get the early edo jinchu treasure? Is it limited or permanent?

1) if i remember correctly, edo yugito is abit worse bc not only does it remove buffs and shields, it also decreases attack. H*so has super armor so Han might be better but Edo Yugi is immune to debuffs I believe.

2) Edo Jin treasure will be time limited but it will be released only after all edo jins are released one at a time I think.

1. But edo yugito will ignite almost all opponent, while han got nothing in his mystery.

3. What would be the super rare in the treasure?

Every Edo Jinchuriki is a super rare themselve and cost 210~250/each. All of them has their own limited treasure which contained 2 rare ninjas that are normal jinchuriki and kage ninja. For example Fuu Edo treasure contained Gaara Kazekage, normal Utakata as rare and Fuu Edo as super rare.

But that was for CN version and may not be apply to our own version.

So, ill go through all the questions.

1. It depends on who you want in your lineup and if you want a high combo chase or just a regular chase.

Mystery: Very similar with both clearing buffs and shields on the first activation and damage on the second. (Assuming they are the same Battlefield Cooldown and Chakra cost, which I think they are) Yugito gets the bonus of doing ignition, attacking 12 units instead of just an entire lineup, and decreasing the attacks by 12%. Yugito's is better.

Both are situational for your lineups, but in most cases Han has the better standard attack.

Both depend on how you use the ninja (tank vs. support) but in most cases Han has the better first passive.

Edo Yugito's is better because she adds ignition

Passive 3: Both gain health back ba

There are very few things that negate super armor in this game and in most situations, Han is better,

In my opinion, Han is probably the better one. But Edo Yugito does have quite the advantages as well. The main difference is what the ninjas are used for. Han is better as a tank because of super armor and blocking an auto, Edo Yugito is a better support and better for jin lineups (especially with Kurama Naruto and Roshi). I plan on going for her because I have Kurama Naruto. Add in water main poison tai passive, which Edo Yugito's combo chase is taijutsu damage as well, and you can turn 2 Roshi and Kurama Naruto (40 chakra from Yugito Passive).

2. Probably. The limited time treasures in CN are only really useful for the Edo Jinchuriki and getting a couple Edo Hashirama fragments. Oasis is basically saying, we know people would only draw for these ninjas, so we'll release them in events.

3. 180-210 I think. Technically, the Edo Jin are the super rare. If you're talking about either Itachi Susanoo fragments or Edo Hashirama, its Edo Hashirama.

You are totally right about the edo jins being only in events. I'm starting to think it will be like that unless Tencent make a permement edo jin treasure.

I feel like Edo Yugito is very situational ninjas.

Probably she shines well in War, RB and Bond?

With Edo Roshi, she could boost up chakra pretty fast.

If the trend continues and we will get edo han, utakata and fuu "soon", I wonder if thats the right move. Getting Fuu, who is Ay-me

Edo Yagura is out before Ay mutation exists, and the release Yagura was created to counter that structured me

People keep saying that Edo Jin Treasures are Time Limited, but I seen when the seal scroll rebate gave new naruto and they still had those treasures O-o

this how it look . and had time desc

Are a couple of months that in china edo jin treasures are no more time limited but fully permanent, oasis very likely will altogether skip the time limited period and will give us directly them permanently.

this is all of them with their rare ninjas 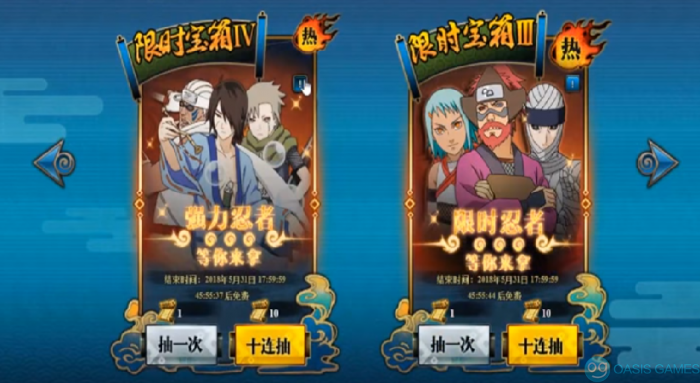 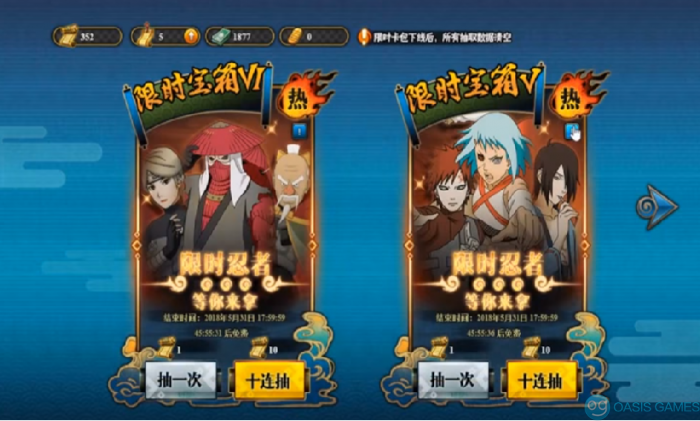 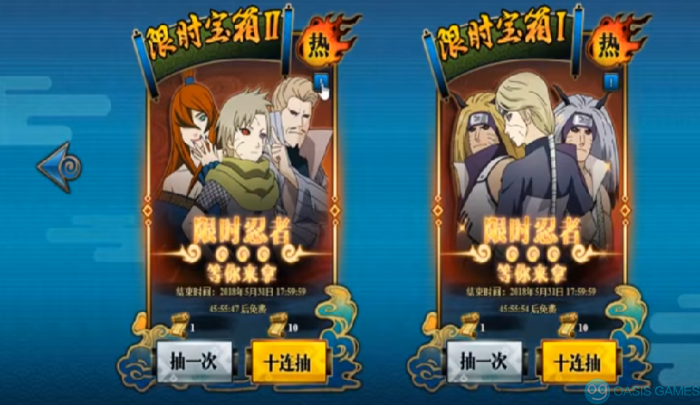