Alright, I deleted what I wrote before, because I just did mine. This might not fit for F2P players sadly, because I got 4th A which I grinded in Kage Treasure for a year :D

Sorry if it isn't pure F2P ninja setup. You can try to look for ninjas to replace 4th A that has High to Knock chase, and can heal up, or has a super armor, maybe Gaara.

Basically Hashirama is almost dead round 1, he should be immobile in round 2 as well. In round 2 Tsunade and Minato will use mystery, but do not use anything, make sure that Hashirama is still immobile, and if he is, quickly use 3rd Raikage on Minato before he casts mystery. Hashirama should be dead from the 3rd A's huge damage, and Minato barely alive, but he will die from Konan and 3rd standard attacks. Gaara should be half alive. Later use Konan un Naruto, after that you should start chase combo on Naruto. Gaara will die from Konan and 3rd standards as well. At the end it will only leave Tsunade alive, or Gaara if he is still alive, but mostly heavily damaged by Konan +1 mystery, which sets aflame enemies. 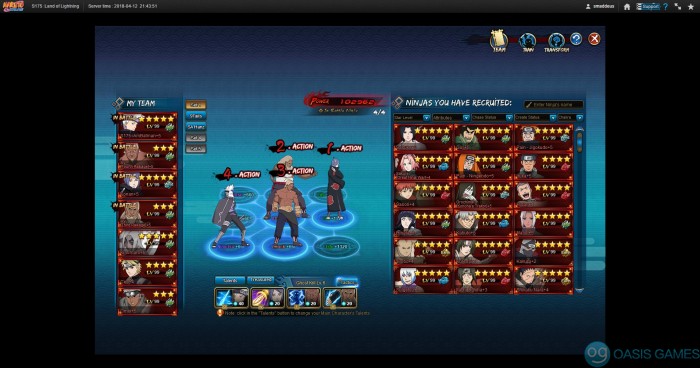 You are way too low for it...amazingly you got that far though. All I can say for you is to power up, and it will take for you a while to get up to 100k. So start powering up only, if you want to beat it, since you will be stuck for a while until you can beat exam 200.