Are there any possibilities to appeal for mandatory name change card distribution for newly merged servers? We're having issues with Private messaging since we got merged and I assume it is an issue to the tag added to our names [S999]-"Players IGN here being too long due to server tag added" and its kinda inconvenient. if you're telling us to use our valued resources and hard earned coupons for your system's incompatibility, then theres something ultimately wrong with this process.
I am just here to express what i thought is our right. and if you find my post offensive just put it down.. but we wanted insights from you guys on how we're going to solve recurring issues.. the community is here for you Mods / Admins / GL's and everyone from the Oasis team you just have to stand on the middle ground and listen to both sides, We players wanted to enjoy the game as much as possible and we understand that on your side this is a business and we wanted you to gain as much as possible too and sustain the game for the longest time and help it expand.. but the 2 communities have to walk and meet each other in the middle. since the issues about redundant events and unsolved technical issues are left hanged until forgotten, it wouldn't be hard to try at least to listen to communities.. for example on events there are newly opened servers we rarely see [Medium Refine Rune] as we see it its not on demand on old servers anymore but we.. from new servers need it as much as every starting servers do, are there any possibilities that 1 or 2 events can be controlled by the community via poll? unless its fixed and nobody bothers to edit it. but this is just my opinion hope i don't offend anyone. sorry for wasting your time reading my post if it doesn't make sense to you.

Hi! What message do you receive when you try to private message? Could you give me a sceenshot of the error by chance? Also is this happening to most players on your server?

Also, can you provide me with your in-game name, server ID, and UID.

All players who tries to PM these players that has long names, we never had it before getting merged so i assumed it was from our server tag 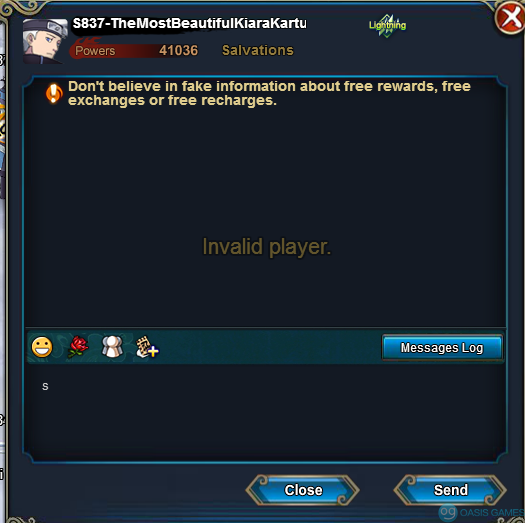 Try hiding the Server tags .. At character interface, you can see "Hide" *on in the upper part of the Character Interface, above your name .. It hides the Server tag ..

Can you report the issue with that same screenshot to customer service. I will also ask my team at the same time and get back to you as soon as possible.

I am having problems because of this issue. It was bringing problems like not being able to create a team without changing the name of the team but I was dealing with it not to steal your time for a small issue. However, after merge, now it became a serious problem not being able to take personal messages. I was not informed with a message about the number of characters in the nick. So I couldn't know it would be a problem. I reported via CS ticket. They are also invistigating. I hope it will give me a chance to get rid of this problem.