So this thread will be about showing you all of Tactic system stats for each level, their growth point needed as well as some tips for newer players about the system itself. 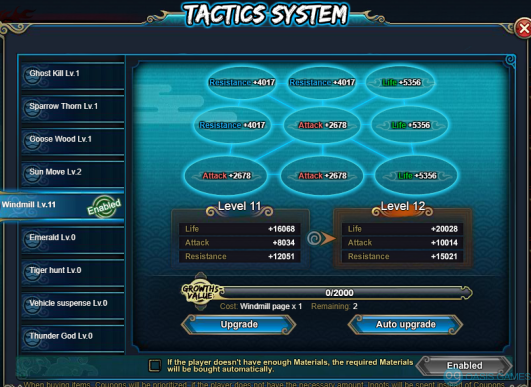 So I will write detailed stats for Ghost Kill and Sun Move tactics, but before writing I have to note this:

We can see that the power gain can be quite big, but for what price and how much is it worth?

3. General Talk about the system (Tips and Suggestions)

So after seeing all the stats and prices/growth let's talk a bit about it all.

The system itself is sure a nice way to gain main stats and increase your power, however it's not an optimal way.

In a lot of cases you would prefer actually focusing refines/charms/cave runes/magatama or even myoboku/summon cultivation/clothing before focusing on tactics.

"What is optimal level?"

Optimal level for start is level 5 because it's very easy to obtain and you will find the most worth in getting there.

After that it's very optional and I wouldn't recommend going a lot higher, for example let's say that at 100k power you might want to consider making it level 7, before that there is no real use of making it as you will get more gains stat-wise from even clothings which are cheaper than 6>7 tactic.

"What tactic to choose?"

So this system has biggest problems when it comes to this, it's very limited and if you want to use a lot of different teams you will need different tactics which can become very expensive.

I will say in my personal opinion there are simply 3 best tactics to choose and those are:

This is the most basic one, It has atk / nin / life, making it suitable for a lot of ninjas/teams and making it the best one to use in events such as 9 Tails where you need the most damage.

This is the semi-defensive one, due to it providing insane amounts of resistance making your support ninjas in back row much more tanky.

This tactic is suited perfectly for position 1 Ninjutsu-ba

The problem being the opposite of Ghost Kill, the fact that this tactic doesn't give additional damage to any Attack-ba

This tactic is purely damage ba

However the problem in this tactic arises that there is no life/resistance which are more important than defense making this tactic only good if you plan to use pure damage teams.

That would be all for now, hope you guys found it helpful!

I strongly believe that, in this regards, the most asked question would be if we will get % tactics like in germany and how all this sistem would be translated in what the CN server has.

And i also know the answer, since you mods couldn't share this info, due to the simple fact that you aren't informed.

Yes I have no info about the % system.

However I know a bit about it from my Germany server friends, and it gives insane amounts of additional stats and power which becomes pretty unfair because for example your ninja well get +2k power purely in Attack stats and nowhere else.

i hope is never implemented.

as we approach tactics % being a strong possibility can we expect guides to pop up on them?

hope we won't get it.

what level do u have to be to use tactics

You unlock tactics at level 60.

Regarding the Ghost Kill tactic, I use it but my units are in the ninjutsu and attack line. And my main summons clones which end up on the life line (pun-intended). My question is, do clones of characters benefit from the remaining tactic slots?