all my peer said they all complete speed training and finished all ultimate training -_- , but this level just one hit all my ninja , they say speed training is easiest , even my group master beat it at long ago while still level 70 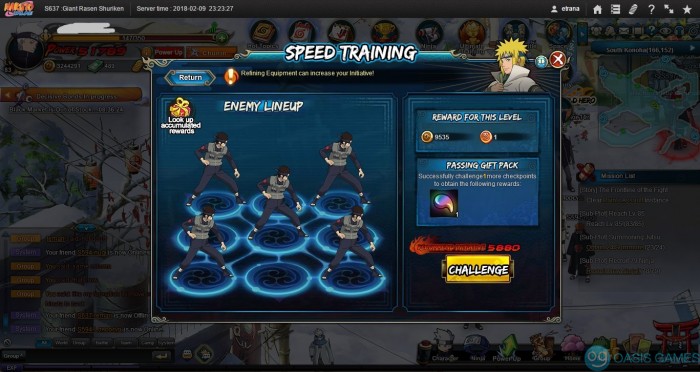 Well...they are level 90 so they probably have more stats than you can handle. That or they buffed speed training.

Rumor is that in speed trial, in certain levels if you don't meet the init requirement, enemy damage and defense are buffed to godly levels. so...

what ?? rumor -_-
i need real explanation because many my peer with lower power beat it already TT_TT

I'm not sure but I think there were reports when we first upgraded to 4.0 that the difficulty of speedtrial had increased pretty significantly. I finished it early on with about the same amount of power as you and even in those final levels hardly received any damage even though my initiative wasn't up to the requirement. They probably found it too easy since people could beat it without the initiative requirement.

Me too, i finished it easily way back mid-3.0 .. that's why i don't know the new changes happening in the Ultimate Training, tho my 2nd main account is not yet finished the trainings and i haven't played the UT in that account .. Maybe the reason why they changed the difficulty of the said trial is to keep players challenged and take time to finish the entire Ultimate Training because of the current status of the players who already finished it and requesting/demanding them to release the update for the UT .. And ofcourse, yes, i know most of the players will say that this is unfair and not good but we must understand also that the game is adjusting for us to keep and maintain the whole balance of the events and features of the game .. Just try to keep cool while playing and trying to finish the UT, patience is the key to success :p ..

I say it's a rumor because there is, thus far, no alpha-beta testing. There have been no counter evidence shown thus far, and players are being stuck in different stages after passing many that OTHER players are stuck on. Given the apparent difficulty, it's unlikely that is due to strength alone, but some mechanic.

There are also, thus far, no counter-evidence to the hypothesis.

However, that's just all it is, a hypothesis. For as long as it is not proven in A-B testing, I'm not going to say it as a fact.

yeah , its fine to change things , but this is overkill

, its gonna take me a months to get 6000 initiative

and after i reach 6000 initiative , im pretty sure this training doesnt even worth anything , my power will already reach 70k -_-

Lol yeah it mainly has to deal with initiative. And other than that, Pain - Tendo and the free charms, and magatama will not hurt or be a waste of time, regardless of your level.

Once you reach the threshold, the difficulty spike will no longer be present.