Alright so this guide will be more toward the newer players, although I will leave suggestions for the function so older players have something useful in here also.

Now about 8 Gates, it's a function that gives solid stats/power at the cost of coins only which is great. (there is an option to spend coupon/ingots on it put I do not recommend to do that ever)

Firstly let's look at how the function works: 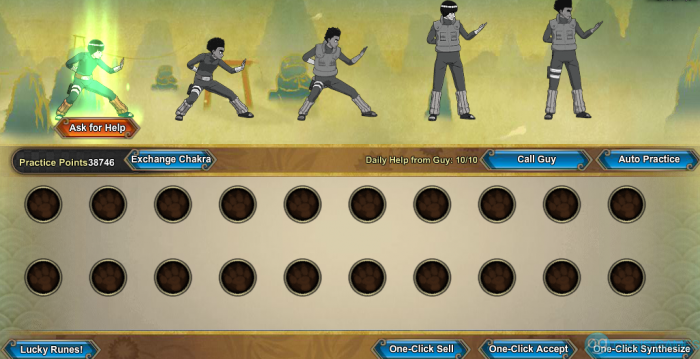 a) First thing you see will be "Ask for help", that way you will receive a random 8 gate chakra. The further you go the better chakra you obtain and the coins cost increases (all are ba)

b) The further you go the more "Practice Points" you'll receive also from each one, the practice points are exchanged for whichever chakra you want and I would highly recommend to aim simply for the purple Quick chakra for starters.

In future when the exchange shop is updated you might consider getting a gold initiative or an important red one.

c) "Call Guy" option uses 100 coupons to "ask for help" the last ninja which is Guy, it provides the highest points and best chakra always however I highly do not recommend doing this, as you can reach him easily thru coins also.

d) Auto Practice, One-Click Sell,Accept,Synthesize is what you should always use when using bigger amounts of coins.

"Auto Practice" simply runs thru the "Ask for help" by itself until you have full slots.

"One-Click Sell" will sell all the empty chakra you received.

"One-Click Accept" I recommend never using unless you have only 1 chakra in the slot, otherwise your inventory will be full of useless chakras.

"One-Click Synthesize" will simply feed the highest color chakra in your current slow, which means all the other ones will be used as exp for it.

Chakra colors in the order of worst to best:

Note: The worse colors can not use better colors as exp (example: You CAN NOT use gold chakra as exp for purple one, the purple one will get destroyed)

the reason I am saying this is because I witnessed a lot of players lose their purple initiative chakra thru this mistake, be careful.

Now let's go to a more important part, where you actually equip and use your 8 Gates.

We have 5 main stats and 9 secondary stats and those are:

With that said, you can only equip max 8 of them and the last slot is unlocked at level 100.

Which means you can only use a bit more than half of them, therefore you have to choose wisely.

About their levels, max is level 11 and optimal (to the point it's so expensive) level are 10 for gold and 9 for red (purple is easy to max level)

So it all really depends on your play-style and your current lineup, however I can tell you which ones you can exclude from your right away except in rare cases:

Life Recovery (It provides a passive heal for a ninjas after each round but it's a small one, pretty much never use this one)

Combo (you could use it on such ninjas as Jonin Minato who have good benefit from combo, however generally not much recommended)

Control (good stat in some cases, if you are using a blitzy lineup without protection then this might help with bringing higher chance of control fail on you, otherwise can be really useful on control heavy ninjas also to improve their chance of control (example: Masked Man) )

Attack (Pretty straightforward one, you use it on damage dealer who prefers Taijutsu, but since most ninjas have tai/nin in their skill you'd prefer to use both atk/nin, however mostly useless stat for support type ninjas)

Life (A very useful one for pretty much any ninja, it's not a bad idea to use it on all, especially if you are running teams which are more ba

Initiative (affecting the speed of your ninja, this one is a MUST to use at least on position 1 ninja, using on all other is optional however it's very useful if you want to win barriers and other ninjas going faster also)

Tai Pen (increases damage caused by Taijutsu attacks, highly recommend using this on damage dealer ninjas such as pos1, however it's useless for supports)


I will make some suggestions for you guys,however it always depends on a specific ninja:

That would be all, if you have any questions or think I forgot to include something feel free to leave a comment !

only red i got is life recovery should i ditch it and have it swallowed when i get another good red chakra?

do you guys use nin pen and tai pen runes? im quite confuse coz i use heavy nin pos 1. should i use nin pen? i got high crit and injury.

I thought I read somewhere that tai pen, nin pen, and dmg reduc were useless and didn't actually have much effect. Something about chinese/taiwan servers players who recorded data?

Personally I tested it some time ago and tai/nin pen appeared to have very small effect to my damage, like 100-200 more damage (but might've been just luck..)

Players from Chinese servers claim that they completely don't work, I say try testing for yourself.

However Damage Reduction does work, but it doesn't reduce any signifacant amounts of damage.

Great Guide except you might want to make an official edit on the guide about the controversy with tai/nin p3n3tration.

I should add that ninjutsu on supportive ninjas is a must, so is not similar to attack :)

thanks for this but i saw someone get 2 red chakra in the same time so how this can happen ??

also i spend about 20 mil coins and i stay don't get any red chakra and i want to know why this only happen to me ?!?!?!

20 mil coins means almost nothing on this system and yes there are cases when players got even three reds in one day. I only depends how many coins they have spent. And moreover assume that every 60k points you will get like 4 reds.

My team right now is Kisame (Shark) Anbu Kakashi, Midnight Blade, and Anbu Itachi. What gates do you think I should go for with this team?

The red chakras are very random and there is no guarantee , I personally knew to spend 50mil coins and get 0 reds so it's nothing new

Mostly damage ones on Kakashi, Midnight Blade and Itachi

And defensive/tanky ones on Kisame

The problem with this feature is that the system is locked n cant be moved. For example i put the best chakra on Roshi [move 1], when he switched to move 2 he would lose his best chakra.

when will shop be updated with red runes?

I don't have that kind of info, but it should come eventually