I'll give out as many info as possible and talk about my suggestions toward the feature and how to handle it over time.

So this is a great way to gain power currently, just 1 tool can give you as high as 10k battle power if maxed out. (and you can equip 4 of them)

More importantly it can give a lot of initiative/crit/injury which are one of most important stats in game for sure.

I shall divide the guide in 5 categories for the 5 options it has for convenience.

So this tab is pretty self-explanatory, it's a simple tab where you equip and un-equip tools from your ninjas (keep in mind you can have 4 exactly same tools on all ninjas so they don't have to be different as in this screenshot)

But I'll talk about the tools themselves a bit here.

There are 4 types of tools and those are: Golden Rope, Leaf Fan, Shichiseiken (Sword) , Benihisago (Gourd).

With that said I would highly recommend using Ropes on all 4 ninjas or using 3 Ropes/1 Gourd (reason being that Gourd gives high amount of "control" stats and it can be very important for example if you are using Masked Man or if you simply want your main/support ninja to get controlled less, reminder: every 1000 difference in control stats = 10% more chance to control fail)

Now Treasure Tools are divided into 3 categories: B-Common, A-Great, S-Superior (Obviously the S rank one is the best one and your goal will be to have 4 of those)

Differences are in stats generally and in max levels available (for example you get 3rd row of secondary stats in S tool also while A tool only has 2 of them).

I'll provide you guys with a screenshot for exp required for each levels of secondary stat. (you level them up thru the blue/purple/gold Orbs) 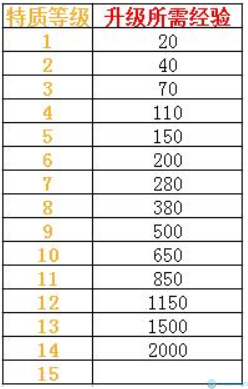 There is also level 17 which is not in this table

About leveling each trait, for example:

So leveling all 3 provides decent amount of initiative, however choose the one you want to focus on more depending on which stats you prefer. 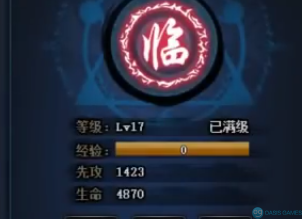 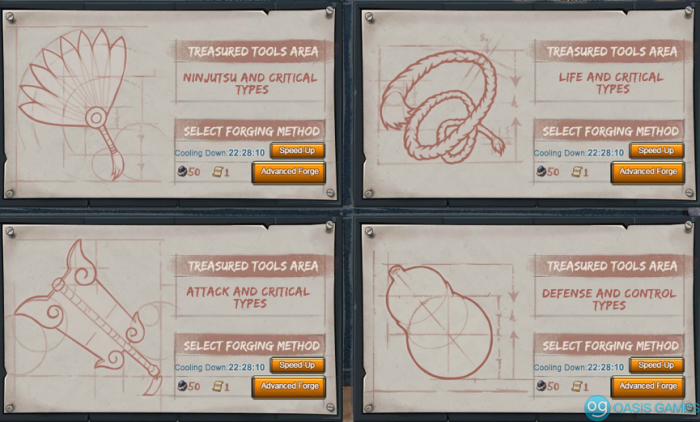 So the forging part of the function is fairly easy, you need to have 50 ores for each forge and you can forge 1 free per day (2 if you have Jonin Medal)

You could also forge it anytime if you buy the "blueprint" which gives you a guaranteed A rank one with chances of S.

But rest assured as you can receive both A and S ranks from the free daily forges.

I do not recommend buying many blueprints, if you have the patience maybe none at all. However if you are a competitive player maybe it would be safe to get a few A ranks from blueprints at the start. 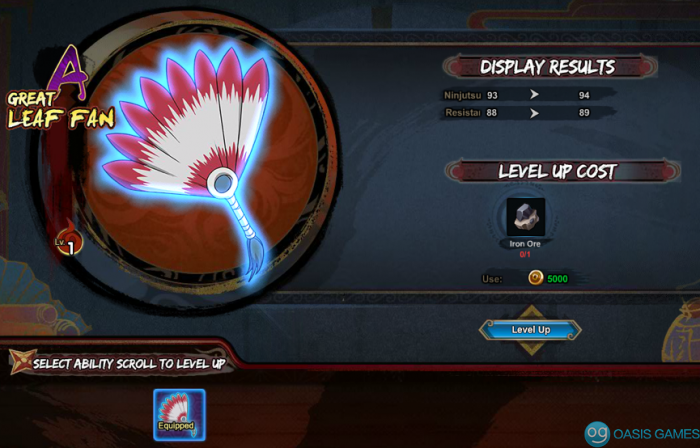 This feature is pretty self-explanatory also, it's a place where you level up your tools.

It will require decent amount of coins and a lot of different ores (the higher the levels the more and additional ores it will ask you to use).

Now leveling itself will affect mostly the ba

I do not recommend leveling up your tools a lot at start because you will most likely want to recycle them later.

When you get your desired S rank tool then it's time to go full into leveling it.

Also a personal tip is that you focus mostly on your position 1 ninja tool, so it will have highest level of both ba 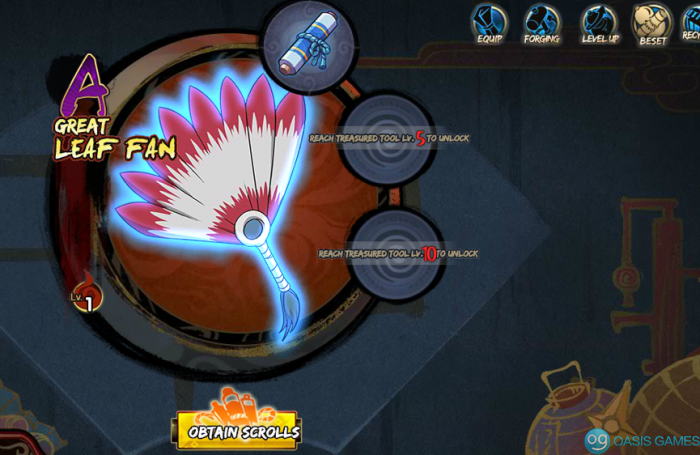 This is the place where you can equip your tools with preferable scrolls to use in-battle and to level up your secondary stats using the orbs.

There is also a treasure type of function inside if you click "Obtain Scrolls".

I'll talk about both scrolls and the treasure.

The buffs/heal are scaling in a way that round 5 ones will always have the highest buff and round 2 will have the lowest. (but preferably if you are playing aggressively you would always want to use a round 2 one)

Ability scrolls have different colors such as blue/purple/gold/red with blue being the weakest one and red being the best one.

Note: You can only use 1 ability scroll in battle, while you can equip 4 of them (choose which one you want to use in round 1 of battle according to you opponent otherwise it will automatically choose the 1st one for you)

How to obtain the scrolls? That's where treasure comes into play. 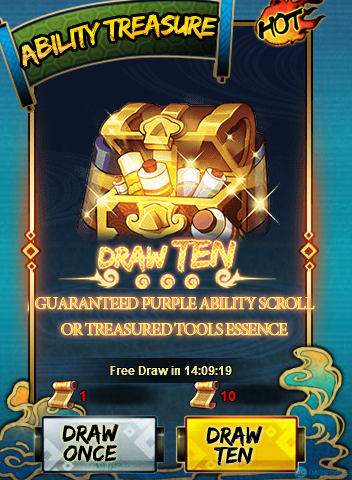 The treasure provides mostly Ores, Orbs and Scrolls from draws.

10 draws giving either a purple scroll or a few purple orbs meanwhile each 50-60 draws there should be a golden ability scroll which acts as a "rare".

Red ability Scrolls acts as a "super rare" and by player info it's estimated to drop every 200-250 draws.

There is also a redeem shop, you get 1 point per 1 draw from the treasure to use in it. Personally I would recommend going for the purple/gold orbs from there (they actually have the same exp/cost value so would be same thing if you redeem 1 golden orb or 15 purple ones, unlike the blue one which turns out to be more costly in the end)

Is the treasure worth it? I say not so much

The rewards aren't as good as they could be, only the very competitive players who are in a rush to upgrade their tools now should draw it.

Otherwise stay with free draws and hope that some free scrolls will pop up in events in future.

The orbs should appear more often in events in future also. 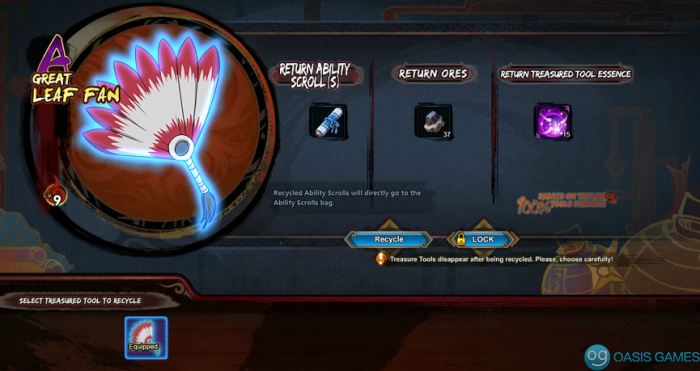 The recycle destroys the tool and will provide you with 100% orb return, 60% material (ore) return and 0% coins return.

Due to the 60% material and 0% coin return I would not recommend to level up much your current tools as you will lose out on a lot of material when you recycle it later.

I would recommend staying at a normal level range such as 10-20 on B rank, and around 35 seems ideal if you get an A rank one you want to use.

Safest is to wait out on your S tool and then go full on toward leveling that one. (of course if you are patient enough)

That would be all for now, if you have any questions feel free to ask and if you feel I forgot to mention something let me know so I can edit into the thread.

Hope you guys find this helpful !

About getting S tools, you said you should get one every 20 forges... normal or adv forge?

Ty for the other info, much appreciated.

That sequence was an example took from round 2 ability scroll, I haven't tested others but I believe most are same. will confirm later

Also I believe max level is 5, will also add that into the guide after confirmations.

As for the forges by player observations it should come sometime around 30 forges, nothing is guaranteed. And it doesn't matter which ones normal or adv forges(adv is used if you want instantly A rank and to remove the cooldown).

I think the best thing you did in the guide is that you clearly explained each stat a ninja tool can have. you also explained how the different tools will works and to let everyone understand and so that they can decide which ninja tool they want, while most other only tell everyone to get the rope without explaining much. Just wanted to write to as a thank you for the guide :)

Thank you, glad you found it helpful

I did want to clear that up, Sword and Fan can both be amazing tools still but depending on which ninja you would use it.

thanks for a great guide

Glad to hear that you guys appreciate it !

Exactly what we needed, another nice guide Ice

at which treasure tool level will you unlock the 3rd secondary stats seal looking thing?

You need an S rank tool for that

where do i get orbs

Currently only way is the "steal" card flip in your mine if you get luck and you can get some with pulling the scroll treasure.

They should be appearing in events in future

thanks a lot for the guide, really helpful for everyone !!

What you recomend to do with the B treasure tools that we obtain from free reforge?

Otherwise just recycle them as soon as you get them if you don't need.