Hi guys!
Got it from Brothers' Farewell (Normal).
Can anyone confirm if we can have all stats at orange quality?
And what are the best combinations of stats we can reforge it into? 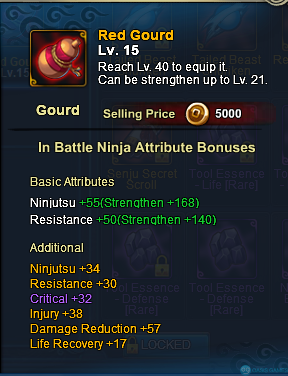 i got this like 2-3 week ago
i still didnt do any reforge for this tools . 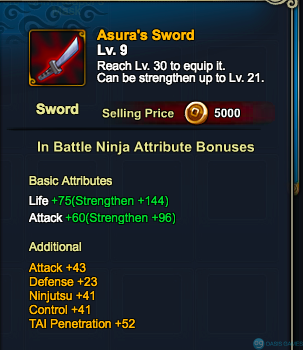 the best stat is Attack , Ninjutsu follow up with Life , Def And Resis

or this Thread will help u

All orange is probably theoretically possible, but I have yet to see one after the nerf (before which ALL of them do)

That said, if you are planning to reforge, then what stat a single piece have to start with is hardly relevant. Orange is a range and not a single number. For example, despite you getting a orange + nin, you probably need to reforge that anyway, into a higher one, the low 40s are possible even post-nerf.

As far as ba

1. pick the tool with the most amount of peak stats that you would keep post-reforge. It doesn't matter if a tool only have 5 stat instead of 6, it doesn't matter if 2 of those 5 are purple or even blue, if the other 3 are high, that makes it better than a tool with 6 mediocre orange. So before starting to reforge, go through your tools and check what amount of stat you consider to be acceptable and then check how many of such stat each tool have.

2. Focus on element forging first. This is a bit complicated to explain. But to put simply, it is cheaper (in terms of elemental stone) to get a full matching set if you element reforge 3-5 SETS of ninja tools and then puzzle out a matching set out of it then it is to start with a set and then keep re-rolling to make them match. It have something to do with multiplicative selection but let's not go there.

Which one you select will depend on which you value more, elemental stones or ninja tools. Ninja tool reforging are expensive, other than the doner, you need 6 other tools to ensure the reforge (or 5 with a pig etc, but expensive nevertheless). The second option will require more reforges because you will have less peak stats with an essentially random set of gears that are selected ba

At the same time, if you go with option one, then you are bound to a specific tool to work with for rolling elements, and that would cost more elemental stones to get a full matching set.

Just know that unless you are going to be burning money for this, you won't have enough of either. Since the change to elemental stone where it takes 3 per roll, even option 2 will be difficult for getting a full set. And even for someone who have played for a year and half, all my tools are only lv 20 when the max is 21. And I wasn't finished with reforging completely. I say "wasn't" because I "had" to stop due to the tool nerf, at which point further reforging would not have been beneficial since there is no good new donors. In any case, my point is that it would take roughly 2 years of doing max TI every week to get enough tools to fully level and reforge all your tools.

P.S. you COULD try to hold out on reforge until they release the next TI. Rumor has it that it will have pre-nerfed secondary stat. Which means if you reforge now, you have to do it again when that comes out. But we don't know when that would be.