Finally, after an hour of struggle, reached six paths with these wonderful buddies.

I don't have Sailor Uniform Sakura yet, so I took SB Kurenai instead.

Maybe it was just pure luck, as I haven't faced an S. Itachi or S. Sasuke user; frequent ones were the full cloud team.

The round 1 fuguki+roshi combo pretty much did almost everything, as when the enemy enters 2nd round, they're severely injured.
Poison tai and ignite are no joke, and even when the enemy ran a fire main immune mystery, the second round roshi and fuguki still kills the enemies.

I cannot say the same if I'm up against more high end teams. Maybe I was just lucky that I barely survived the full cloud me

Congrats! Welcome to the Club of Six Paths :D

Btw, about the season rewards, are we going to get all the rewards from ninja school student through six paths?
Or, we're getting the rewards only from the six path tier?

You get rewards ba

i found another annoying team..darui, fuguki, sailor, water main....Seeing the team i thought easy win...but i was never so wrong..instead of burn it was paralysis, and somehow the damage was too much for a healing team and my main was dead second round. i was using mei, mabui, tenten team(yes people still use that

)..I delayed my mabui mystery in the second round so i can control after all heals go off,(i was paralyzed from previous round because of darui 10 combo chase). But Fuguki just did his mystery and killed my main, i have no idea how that team did that damage, it was overwhelming. Then my team fell apart as they healed their way to victory.

I was using Fuguki, Roshi, Sailor Sakura, and Water Main and I managed to hit six paths.

I was 3 games away from six paths.

Then my 3rd game which got me six paths was my first opponent and I smashed them the 2nd time around.

what summon do you use op ?

and what is your setup for your main ? 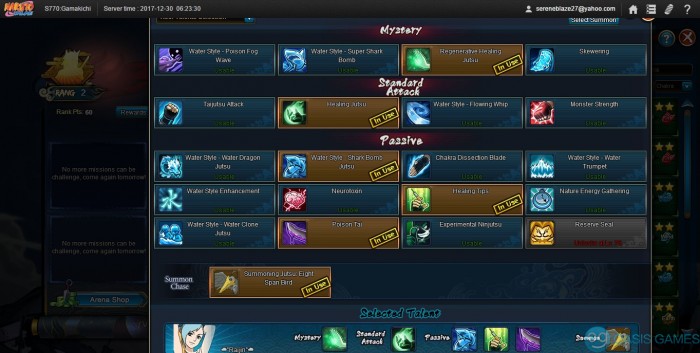 Imo, you c*e White Monkey summon, that way your combo connects with Kurenai and you would chaos someone every round.
Healing tips + kurenai's mystery = LIT!
Also, it almost feels as if I just breezed through the ranks, from Kage to Six Paths in just ~1 hour.
My total team initiative was only around 8k+.
Just figure out which summon fits better, and it would be much nicer if you could connect combos with Kurenai.
As you can see, I couldn't connect with her, so there were times I lost just cause I didn't take advantage of that hard CC.

Edit: Sorry I had to use my old char's username. Lol

Yes, it really surprised me at first how much dmg they do from just a combo each round, and the poison tai just makes it even more annoying.

UPDATE: This lineup is basically the Anti-Han/RoshiSailor cancer teams that it's not even a contest. Total ownage, there's just no way a Han/Roshi/Sailor team can even bring this lineup's hp down to 50% that it's almost unfair. By the time enemy sailor does standard, she's ignited, and Fuguki annihilates her completely with stacks of poison and ignites. Roshi+Fuguki combo eats sailor alive. Just make sure you release Fuguki's mystery AFTER both azure and sailor's standard healing. By round 2, sailor is left with 1-5% hp, where you just drop Roshi bomb to impair enemy team. Proven and tested after countless battles with Han/Roshi/Sailor teams.

This team, however, has problems with full blitz teams, and even the Mei/Mabui teams if they have much higher initiative. Otherwise, this team feels like a cheat that everything, even post-six paths seem so easy. Now I'm not some sadist that keep hindering others from achieving six paths. Just did some battles to test the consistency of this lineup in the ranked arena scene.

We're in an age of actually seeing a hard counter to one of the most cancerous lineup that people have been complaining about.

This is why you carry around Kurenai, she is basically your super support considering she outputs massive heals, and a massive shield to boot with her mystery. Plus a handy Mirror.