However, some of new lvl players might be a bit confused about how and when to reforge ninja tools and which ninja tools to reforge, this is what I am going to go in details in this guide. There are also players asking where to get them, so I will add an extra section about that.

Where to get the new ninja tools

The new ninja tools are mostly in Brother's Farewell TI, and Asura's Sword is in Hard level The Rinnegan's Pain TI.

However, although only red gourds are shown in Brother's Farewell Hard, I got fan and mask from doing Bro's Hard TI as well. So for higher power players, it is recommended to do Hard TI, and they seem to have higher chance of dropping red nature stones as well. So far, Asura Sword seems only drop at Pain Hard.

Following are the pictures: 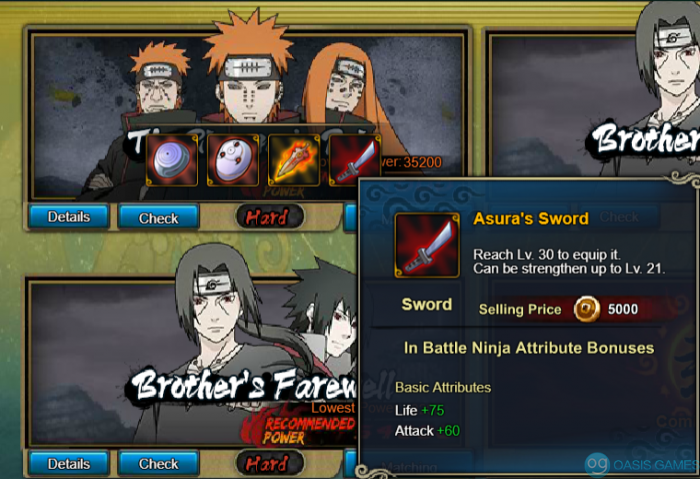 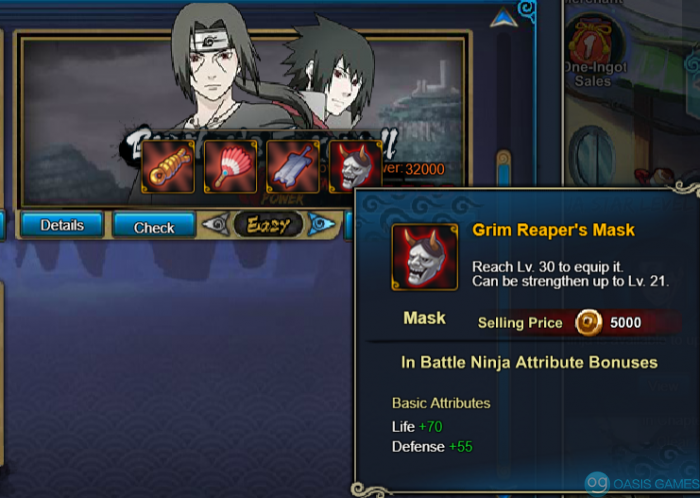 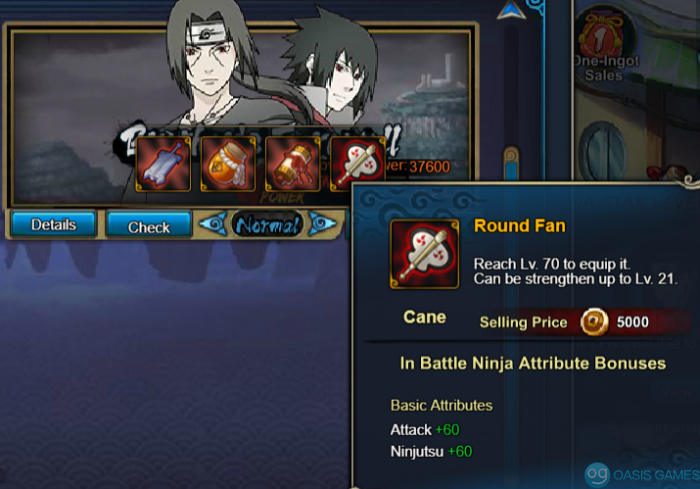 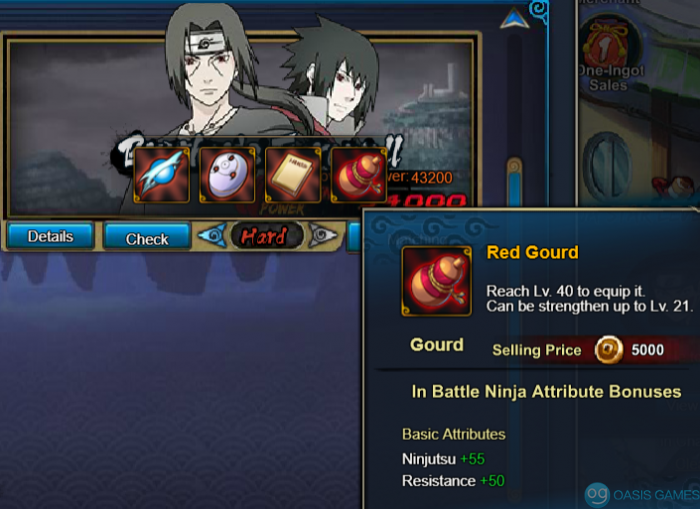 Gourd: Bro's Hard (Already available in 3.0, so most people have several gourds already)

Which ninja tools to reforge

I will make have a comparison of old or*e tool with new red tools:

As you can see from above, all new red tools have 10+ increase in ba 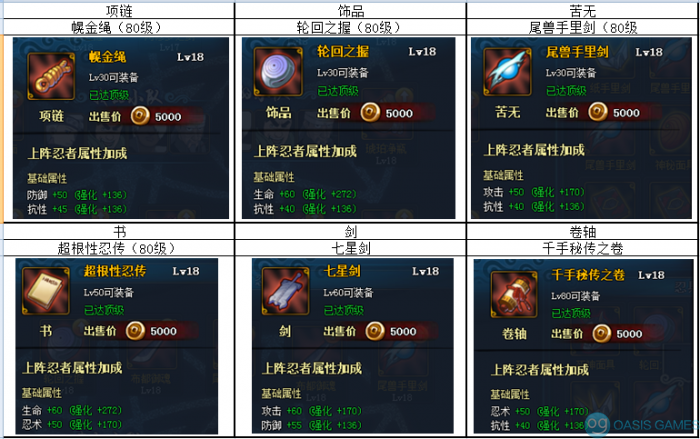 But the rest orange ninja tools will stay the same for a while in 4.0, so you might want to reforge the them.

However, with the new FiveKages TI coming in CN server, there is one more red ninja tool added to CN server: Six-path necklace, 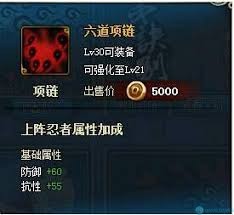 So you might not want to reforge Golden Rope right now, and wait for Six-path necklace.

When to reforge ninja tools 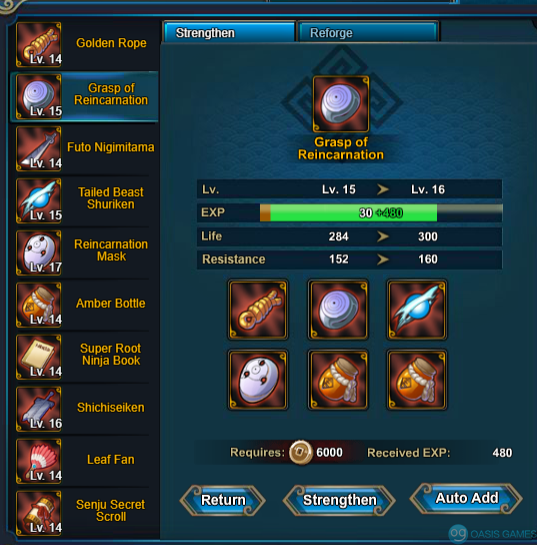 How to reforge ninja tools

And always reforge using 6 tools as offerings, so 100% success rate, you don't want to waste Tool Essence, since they can only be obtained in Ultimate Training so far.

Moreover, you want to add new stat to the tools with empty stats first,

However, after some discussion with Achroma a while back, the stats on Ninja Tools are not necessary for power, so primary stats might give more power in this case, but it is more beneficial to reforge element resistances on Ninja Tools. 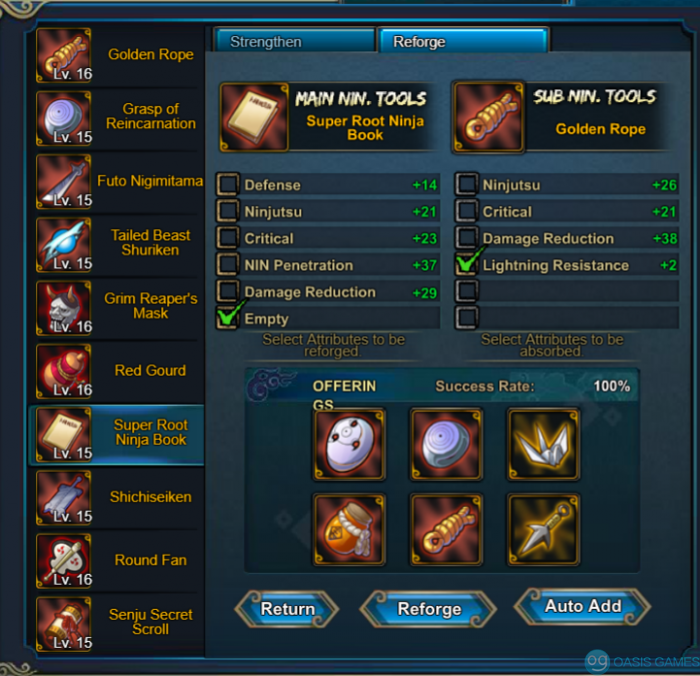 So in the end, you want to get get a Ninja Tool like following:
So 10 Ninja tools would give 20% element resistance for all elements, which are quite important for higher level battles. 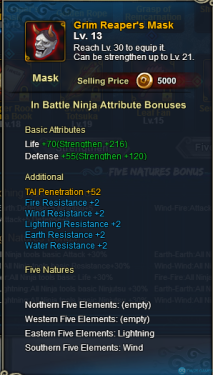 However, for the players who started playing in 1.0. they have ninja tools with better golden stats, so it might not helpful to reforge those. 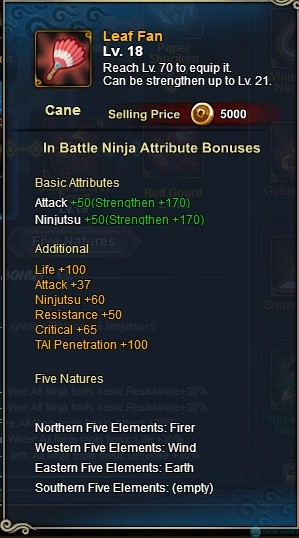 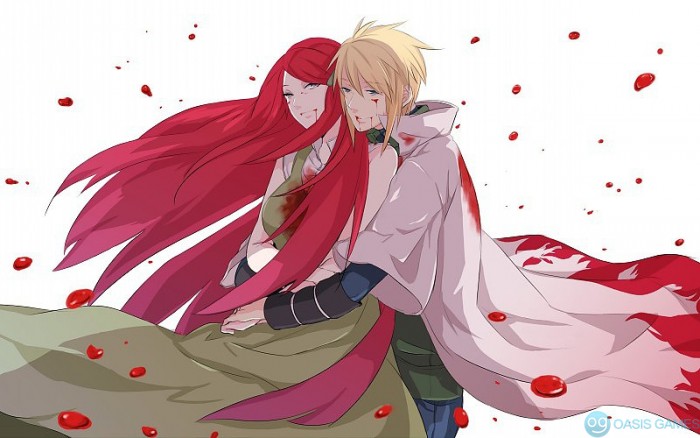 Just one thing, only red tool we had before 4.0 was red gourd, others are orange, thats why they use orange five nature runes.

Info location to get, please. Thanks before...

The new red tools are generally in Brother Farewell TIs, you c*so get Asura''s Sword in Pain Hard TI

Put Ninjutsu and attack on each tools

it will give you Much power .

Yes, you are right, since attack and ninjutsu are primary stats, they indeed give a lot of battle power

Sorry to inform you that tai/nin pen is totally useless outside battle power. It was confirmed by the same chinese youtuber who shows the newer teams Tobei uses in his chart.

He couldn't say about combo and injury, but usually critical is the second secondary stat (after obviously initiative) sought in CN servers.

I haven't tried Brothers normal yet...but I have gotten 2 Round Fans from Brothers hard, as well as the Gourds...so that's one less 'lower tier' TI for players to worry about i guess.

That's really interesting, what's the name of the youtuber?

Also I heard somewhere that the essences are obtainable outside UT now, but where?

park for future reference, plus ty ^^

"(After some explanation with Tobei, *ion actually play an important role in the game right now. I still need to do more research about it)"

thanks for the guide, Ive been hearing they added a mask and and a sword but have yet to see or confirm its location. Good to know where they are... But do we really have to go back to Pains haha.

How can you get the ''Tool Essenses'' to reforge?

Hmm...exactly 100 Pain hard TIs and the Sword is a no-show

...that's less than a 1% chance that it even appears (let alone is rewarded)

Next week i'm gonna put this on hold and go back to Brothers easy....maybe it'll show up there, or if not i can least get an epic tool that i know will appear, lol

Element resistance is useless? Are you sure? Imo having 20% resistance to all element in long term will me*ot more than 60 ninjutsu/attack per tool as your power increases.

Could we get a confirmation on elemental resistances are useless on ninja tools?

Seems u all misunderstanding bout Resis . it not useless.

Element res is not useless, in fact it is good to have element res on tools, I will update this guide later. Didn’t have much time