I am running Yamato, Iruka, EM but for my last option I dont know who I should Add.. i dont have WB Asuma which would be great, I was thinking an earth ninja which it comes down to Lee or GNW Lee. Which one should I use?

Hi! Do you have Eight Inner Gate Lee by chance? If not, either GNW Lee or Regular Lee would be great options, I would probably use Regular Lee just because his standard attack can cause 5 combo.

Yes thats what I tho. I think regular lee would be better and even more that I can get his frags super easy to get him 4-5 stars

thanks :) future replacement would be

What do you think?

Yupz! Those are definitely great future options for an earth main team =]

Hi there! Yeah, it is much better if you use Lee[Eight Inner Gates] if you have him, but Regular Lee would do the job too .. Then just use the EM skill that gives double attacks ..

Thanks man, do you know which earth main talents is used for nine tails?

earth main,iruka,yamato,wind blade asuma what i use. talent 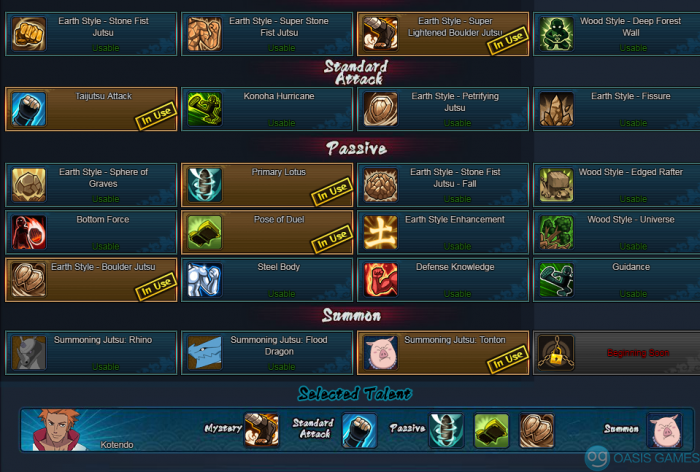 iruka + earth main shield will stack making pose of duel last longer. tho not everyone has wb asuma. i would use guy instead. (8th gate lee) isnt so hot in world boss unless u got him 3-4 or 5 stars. my personal preference . i prefer a flat dmg boost for my team over a ninja that can attack twice.

Just to note. Keeping playing with Yamato until you get Hashirama. Yamato is better than Onoki since you will be able to set his barrier again in round 4 while Onoki's passive barrier only lasts for 3 rounds.

Actually, as far as barrier goes, onoki is better than yamato. Since Onoki buffs all 4 while Yamato only himself and the Earth main. WB doesn't do a heck lot of damage himself so that's not such a big deal, but iruka is a major source of damage.

The thing that makes yamato better is the fact that he deals extra damage to fox. It barely sets him above onoki, if at all.

I mean Yamato does have before-attack-special while barrier is up, but onoki also give extra attacks. And Yamato only gets to use normal attacks 4 times (thanks to lightened border, he gets a total of 6 action in the 4 turns, 2 of which being barrier up, so 4 attacks, probably 0(1)-2-1-1(1)) which more or less cancel with onoki's unreliable normal attack. Granted, onoki's self damage will make him lose WB buff, but he have a mystery attack to compensate for that.

So in the end, the thing that sets them apart is the fact that Yamato deals extra damage to giant creatures, everything else matches up. And tbh, it's a bit of toss up given onoki's barrier advantage.

The one thing that can "seal the deal" is the fact that you can get Yamato to 5* easily, so he will do even more damage. At the same star level, I'm honestly not sure which would be better.