So this just happened.

Gratz to me right?Not really when I was one of those who decided to buy Kirin from an event last year (which cost me an arm and a leg)

Shouldn't their be a system in place to prevent such things from happening? It really discourages me and I guess other players who choose to spend heavy into some of hese events only to pull a dupe later on. Or even better, give us an options box with either (KOH/Kirin) as a choice.

Will I be cashing out on 288k pts worth of runes for KOH? or work towards another 2k sum seals pulls? Prob not & never 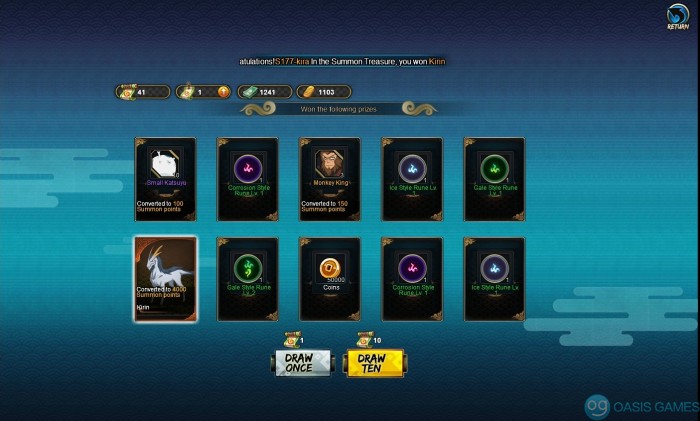 A lot of the purchase options are not pay to get exclusive but pay to get early, I think the problem here is that you misunderstood and have the wrong expectations.

You said last year, that means you got at least 9 month of early use out of it, that sounds reasonable.

I know that feeling, tho mine is not heavy as yours. I'm buying Serpent fragments for so long just to have it, and when i reached 78 fragments, 2 more fragments to get it. Then tadaaa! I pulled it when I drew ten. Converted into Summoning Points that is not equal for what I spent. :|

During the early stages of the game, most of us were not even aware Kirin was an exclusive 2k pull in Sum Treasures.

Our knowledge and understanding is KOH was the exclusive pull.

It wasn't until much later I found out that Kirin is a possible pull, however not very common and frequent as KOH.

Regarding "got at least 9 month of early use out of it, that sounds reasonable", I would argue against this.

The cost they set it at in the event, the cost of 2k seals, and the use of Kirin does not make it reasonable in any way.

What I suggested is a simple solution and win-win scenario for both OAS and players.

I guess the purpose of this thread is more of a rant, but also my suggestion in a fix to this however it is just my opinion on this matter, and you may disagree.

Yea I know the feeling although on a much smaller scale than my case.

I was just trying to get out, stuff like this would heavily discourage paying players to pay for ninjas/sum in events if they're just going to pull a dupe later on.

Would I spend $800 to buy Ay this week if i'm going to get a dupe in Kage treasures? Would it hurt for them to put in option packs on each treasure?

Perhaps OAS hopes players pull countless dupes and keeps spending. Although at some point when the pull counters 2k...some people may just give up entirely in my case.

Once again my comments may come off as a rant, but when that day comes for you, you would be thinking no different.

I fully agree with PraiseLuka. What you could be mad at though, is the ammount of coins you received for duplicated kirin. 4k looks like a joke, considering his frags cost 6.7 times more than any other rare summon. When you pull a dupe rare, you get coin equivalent of 11 his frags, with kirin you got 1,3 frag value. I'd asume you'd get at least 10-20k coins. For me, thats the reason to get mad.

This has nothing to do with using my head over money.

Kirin was in an event last October/November when the majority of the community had no idea he would be a possible drop in Summon Treasures.

I didn't * my money this week and bought 2k sum scrolls. It's something i've been ac*ulating since last September and obviously a pull I, and most people were looking forward to.

My example on Ay is a bad one. I just don't understand why OAS even puts Kirin on par as a 2k pull Summon when they clearly value KOH at 50% more (ba

I don't wanna be that guy but come on seriously you had No idea what so ever that kirin was gonna be in summon treasure? I me*l it takes is watching 1 youtube video about summons in CN or even germany, for example I was really crazy about getting A but by watching a few videos and asking around in the forums I found out that not only is A not worth the 30k ingots that oasis is asking for in the recent events but that 90% of his treasure is going to be common ninjas in GNW treasure so I changed my mind.

On your side of the argument, it is easily feasible to be disappointed. For the longest time I remember that Kirin only was pullable through frags. This was also stated by Oasis moderators as well. I guess in the past he could've been viewed as obtainable through the same methods of Susanoo Itachi. Hence the reason they put that summon in events. It was understood that KOH was an exclusive pullable 2k scrolls summon. I'm not sure when they decided to make Kirin a full summon in the treasure but this must've been an update dealing with 3.0

Now, on the flip side of this argument, I would never purchase anything obtainable through shop coins. That's just me personally. Sure Kirin has one of the sickest animations and rarest chases, but ingame currency deterred me from that purchase altogether. Am I saying you spent your money improperly? Not t all. You make it, so spend it as you will. I always preach to my group or other people who spend, that you have to have patience in this game. I don't know much about Chinese seals and summons so I will leave it out of this. Spending though you have to always consider why a business does what it does. Susanoo Itachi for the longest was obtainable through sheer luck of the slot machine and crossing fingers hoping you get 2 frags in treasures. Now he is obtainable through feast wheel at almost half off of his original price point or more. Granted it is ingot only frag purchase but for those who did buy seal scrolls to get him were screwed like a pooch. I bought Mabui and she was released a couple months later as a COMMON. I was torn and may have easily been the dumbest purchase I've ever made in this game lol. My thing is, this game is always changing. Having things early is exciting but not always worth it.

Add an optional choice of a super rare-This could be applied to both seals and summons. This should only happen if you have the the respective ninjas or summons tht are supers so you don't end up with a dupe.

Provide more points and frags- I feel like if you double up on a super rare it should be more rewarding. The ba

Transparency-Not many people are aware that he is pullable. If you do have knowledge of this, Kirin is still one of the rarer pulls between him/her and KOH.

You completely ignore as to what he just said. He got kirin in October 2016, just when the global server opened in July 2016. At the time, not a lot of players were aware of the other servers for them to research. It's not like you made a mistake before learning what to do when you started playing.

I think the reason why Kirin has a high price just because of the animation from the chase since no other summon have a chase comparable to Kirin. It's a dumb reason to have it priced like this but it's the same concept as skins in other games that no additional benefits besides the design.

Reply
Immortal Utsuro
On 2017-10-06 06:36:12 ｜ Show this Author Only
17＃
I for one would be disappointed if all my saving and spending during Summon Rebates lead to me not being able to get Kirin or KOH just because I didn't think they were worth buying.

money make you got the fancy stuff faster than anyone else in this game... however if you passion enough you will get all fancy stuff for free but its of course will take long time... heee

So its 2000+ for them, right now, I'm redeeming my runes to get KOH every chance I get.