So, for a few weeks now i've noticed a very drastic change in my server's own 9tails event. I recently attained a Jounin medal, and was aware of the 15% curve it also gave you during the event for decent added damage. Now, what boggles me is someone who has always been at the bottom of the leaderboard suddenly tying with me in damage - if not beating me outright. I could understand possibly they've been growing in power, gave it the benefit of the doubt. No, it's been happening for two weeks now.

This person, who I won't name, suddenly out-damages me with a lousy team, both un-awakened and mismatched leveled, their power has always been power than mine, and above that even their level is behind me. Below are pictures that compare both our teams, and it doesn't make sense for as to why they clobber me in damage in 9tails. 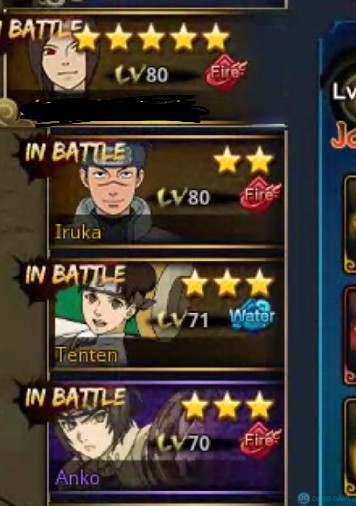 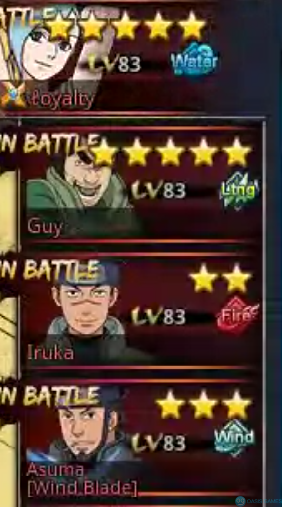 To add more onto this, I use both coupons and coins to have both 30% benefits, so adding my 15% from my medal should make me a shoe-in for damage. Yet, this person who I assume atleast spends coupons on the general boosts can contend with me. Is 9tails rigged or something?

Hi! There is actually one skill of fire main that makes Fire main the most pre-dominant power in 9tails. He has a passive called Unparalleled that in my knowledge causes his dmg to be increased by 50% to 9tails (which is considered a summon). Also, his fire main can buff 3 of his ninjas, while your water main can only buff 1.

Right, but this person doesn't have access to that specific passive, and ontop of that - shouldnt the buff I receive from Gai, Iruka, and Asuma drastically overlap their buffs? That, and accounting for my 15% medal boost.

Hi! Sorry about that, you are right, I didn't notice he was under 85. There might be other reasons, but having 40% increase ninjutsu and attack on 3 ninjas is quite substantial.

Edit: Guy only increase attack by 30%.

And compared to their boosts, mine should dwarf theirs.

maybe the chase combos and use of coupons

- Haze clone that does elemental damage

- Water clone that does elemental damage.

Putting aside the 30% anbu buffs and 10% kage buff from killing Obito, you only have an 35% buff compared to the Fire main; so you dont have that much advantage over him like you think. Furthermore, he has way more buffs than you do; these buffs last a lot longer too. So dont be surprise that he could catch up to you in terms of damage.

Edit: I forgot about Tonton; in summon cultivation you could raise his chase damage.

Anko is like a hashi for firemains. The barrier boosts damage by 40 percent. Toss In Firemains 40%. Iruka's 30%. Tentens crit. FIremain has a 10 combo that hits around 60k-100k alone. Chase is pretty high. His clone. Not to mention his Dragon Flame jutsu hits twice. So say it hits for 90k,tack on another 90 and that's 180k damage alone. Firemain and wind are the strongest in Ninetails. He has the advantage tbh. Lastly, All your buffs but asumas last for 3 rounds

What are the Fire Main talents for nine tails?

Do you use coupons to revive and retreat after tail beast bomb.Also, charm lvl affects 9 tails.You ninjas got 4 elements while his ninjas are mostly fire.

why u even went for iruka/guy/wbasuma lol with water

I like how you lowered irukas and guys buffs on op side while on the other player side you said 40% iruka buff, also is it 100% confirmed that wb asuma increase nin/tai by 30%?

@For the OP: the reason is he owns 1 more high combo chase and your main c*e as damaging mystery only shark bomb that is full nin, so your main gets close to 0 boost from guy (no boost for shark bomb and for water style: water trumphet). Kick guy and use you too tenten and you'll see your damage that gets a nice boost. If you own gnw tenten use her on guy's place.

It is true that scarlet blaze have the +50% boost from the talent, but you seem to forget that azure fang have the elemental strenght boost against wb, because the world boss is fire elemental. And if we do a comparison between what af and sb could do singlehanded against the wb we see there's no match. Azure fang have the strongest single target mystery there is among the mains, skewering, and have both an high crit standard attack, a full nin damage high combo chase and a clone with a nin/tai standard attack while sb have no high damage single target mystery nor any high damage standard attack against an immune target and his high combo chase is more or less comparable to af one (and no clone if you use the 50% boost). The reason why was added that talent for sb in 2.0 was because sb was so behind the other mains that needed an enormous boost to try to be on par but singlehanded is still way behind azure fang against it. The reason why sb right now has the upper hand is because can boost other ninja better suited for wb than af (that only boosts gnw tenten among the viable ninjas for wb).

9 tails can get hurt by all elements so ninjas doing elemental damage do more than standard taijutsu attacks.

All elemental damage has the same damage percentage output on ninetails. No singular element does more damage to ninetails from my knowledge.