Hey guys, i would apreciate if i can get some good advice in what runes should i put on every ninja, because i heard that some runes dont have effect at all or the effect its too small to see a difference, but i dont know what runes are the ones thant ''dont'' have effect.

Anyway here are my runes and ninja 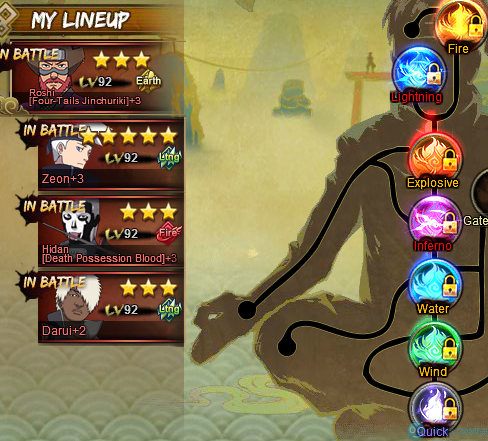 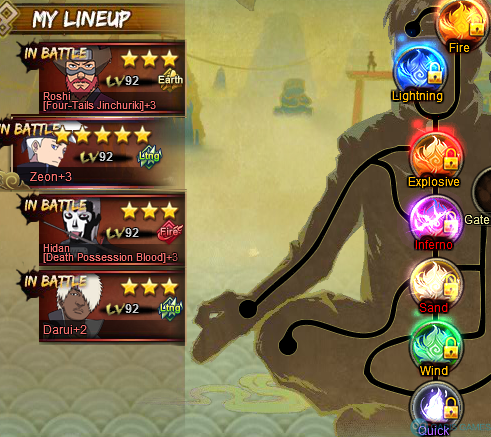 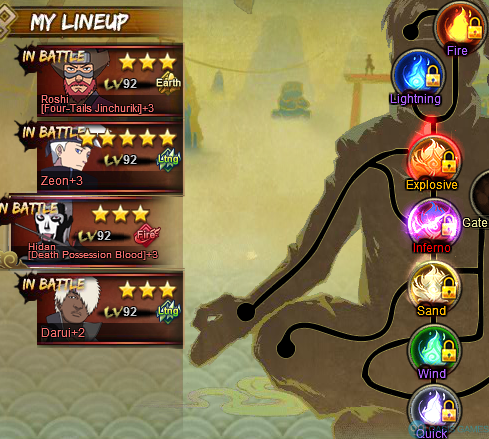 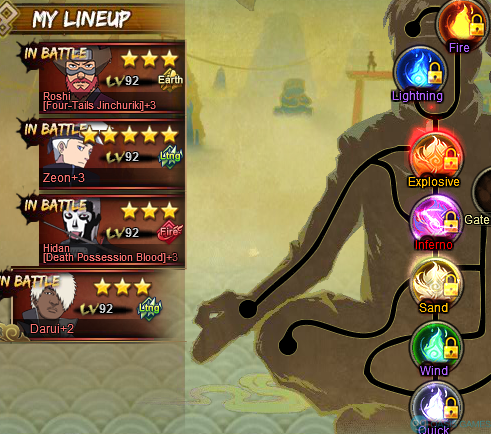 And this is my stash 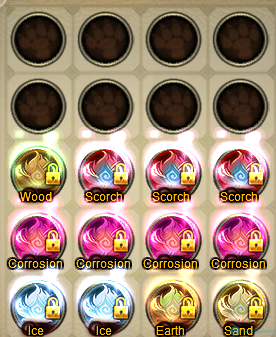 Let me know what you guys think!

i konw that *ion runes have too small effects(they will give you 20 damage max at level 10).The runes that i find are the best are that ones that give the basic stats life,res,atack,ninjutsu. Of course the most important is the init rune.I also heard that damage reduction is very underrated but i cant say that for sure.

Too many things in this game is "heard" and there is no confirmation from Oasis. *ion runes are a great example, more players say it is so underwhelming and no one can explain what it does in terms of game mechanics. There should be some simple formula or % for what they do against defense and resistance but nobody from Oasis bothers to clarify.

They probably don't know why it does not work as intended and have no way of correcting it.

I'm sorry to tel you that the *ion runes are mostly useless. In the old forums there were thereadsof people who tested them and concluded they were a waste of space.

Injury deals with critical hits, so while the same threads concluded that it as not a good stat to boost, the results are debatable and not as clear cut as with nin/tai *ion stats.

Damage reduction is underated due to the ingame desc

The best are and remain the initiative runes (which as of now are only purple but I hope they will soon implement golden ones in an update soon enough), as well as the 5 basic stats: attack/defense/life/ninjutsu/resistance. Then i would favor explosion runes.

A case c*so be made in certain cir*stances for Gale runes in certain lineups, as well as Wood but only if its a red chakra rune. It's golden equivalent giving a max +200 HP per turn seems a bit underwhelming.

I runed some tests with Ninjutsu *ion , Attack *ion and Injury and I can say they are working fine. They boost damage but I can t find a formula or how it "*es" the defensive system of an opponent because it work against Damage reduction too and those stats are like equivalent values so I think they nullify each other. But if the opponent has little damage reduction a massive Tai/Nin *ion will show a big advantage to the possessor. I mean by Ninja tools or red chakra rune gates.

Can you give us some numbers on that?

We don't really need the foruma as long as we have some empirical data on the relative effects of a given number of tai/nin *ion v/s some fixed numbers of damage reduction.

To Armand, even in the old forums, the players just did random testing, it is nothing concrete. You don't get the same attack values every time in 3 rounds because there is a huge range for dmg.

What i really want to say is that every stat should have a purpose and there should be a corresponding graph to show its effectiveness.

For example, Life is basic linear graph, having X amount of life will equal to extra Y amount of HP.

You can't just add some random player stats into the game because "other games have it" and then you have no idea how to code it for your game.

How can *ion be worthless? At least provide us with some real information on how it works and let the players decide for themselves. All the mods have said in the past is to advise us to take runes like life, nin and attack that directly impact our stats. But we already have those, so our only other options are whether to go for *ion in the view of increasing our damage or go for gale / wood / ice for more survivability.

I hope a mod can do something about this and clear it up for us instead of keeping the players in the dark.

That's why people test stuff. From what i remember the people who ran the test did averages on the damage increwase when using high lvl red chakra runes for Scorch and Corrision. Yet they saw no visible effects when they used the runes and when they did not.

These are the only type of tests w e can do, plus its consistent to what the vast majority of the players experienced.

I'm all for the devs to give us concrete info on the effect of nin/tai *ion. But at this point i'm starting to wonder if they even know at all. Naruto Online has many bugs, it would not surprise me that those stats where reduced to 10% of the intended effect due to a coding bug.

If a player of the chinese/taiwan version could tell us of these stats influence fights it would already be a good thing. Until then, I'm going the safe road and use the slots for chakra runes what i'm sure will be of use, so that's what i would advice others to do. It is only advice though and if somebody proves me wrong that would be even better, I could finally stop worrying that i could get a useless red chakra rune after millions of coins invested in them -__-.

We don t know even more how ba

Is the state of the game the same in China? Everyone also avoids *ion like the plague?

I really can't see the chinese being kept interested by such dumb downed game mechanics.

Any recent news, has anyone bothered to test this out in recent time since last comment? Or has anyone obtained info from some other servers like German, US, or same CH and other Asia servers?

I just tested, but I didn't made a long test, it was a short one, and I know that's not how testing works anyway, but for fun I did it.
Basically I left my 4th A and my main, stripped down everything from A, and didn't used buffs given by Lightning main in order to leave A as fresh as I can, and I only left Damage reduction. Don't take me seriously, like I said, hardly can be called a real test. But, enemy had Rosh etc, I made him to take off everything as well from Roshi and leave him fresh.

So first I tried with having equipped that rune.

At first Roshi did 370-430 damage mostly, and I had equipped rune. Enemy had water main with poison, so Roshi did both fire and poison damage to my A. Poison did around 6k damage, didn't saw fire since poison numbers were over the fire numbers.

Next time I removed rune, funny thing was that Roshi now dealt 100 less damage, as if rune has opposite effect of sort :D but we all know this game is bs RNG at certain times. And poison + fire damage was less as well, kind of significantly less after I removed....................pretty weird, right? I mean, it wasn't just TAI damage that was reduced, but poison and fire as well in the same match as opposed to the previous when I had equipped that rune.

If we assume that there might be a bug hidden, a glitch in the code, and it actually does the opposite? I mean, people have tested it and they do not point out anything weird like that, but only the average, but I don't know, I am running 4x of those damage reduction runes, one for each ninja, raging from level 7 up to 9, all are golden/yellow.

Atm I have nothing to replace them with, so kind of stuck.

And with the translations by OG from German servers is weird as well, can't really trust, so I am still unsure whether that rune theoretically supposed to reduce overall damage, or it's damage that you deal to yourself, like, there's only one ninja who basically does that, and it's Hidan, with some exceptions having cursed mark ninjas combined with Kabuto, who damages each round all these cursed mark ninjas, but that damage is super small anyway that it just doesn't matter if he does it.

So theoretically it is supposed to reduce over damage incoming from enemy. Going by this bold translation without details.

ignition gives only 1999 certain max damage depending in nin stat, poison can stack till 4 or 5 times i think so your test about posion damage is irelevant. And about that damage which You refer to TAI *ion i m in doubt... Because that stat either counted first time either was just purely damage randered by tai and nin itselfs. Untill damage calculation formula would be known anything is in a big shadow.

best advice would be to search up itsBtrues video about 8 inner gates in youtube.perfect explanation.

He does not perfectly explains it, I came here from that video to do a research because there was no confirming answer. Just because he is a youtuber you shouldn't take everything what youtuber says as a fact unless really explained to why. He is basically saying the same thing what the guys are discussing here, that there is no actual proof at this moment whether or not these other attributes gives any kind of actual practical bonus or help.

BTrue thinks its true, he thinks people have done research, but he is basically basing his opinion on those people who have supposedly tested it, same people who are being mentioned here as well in above conversation if you would care to read. You see two sides conflicting about what whether it's true or not.

So BTrue is not explaining anything to why since he hasn't done a deep testing himself, he simply read about some stuff, maybe the same posts in which we are in and just read this one guys opinion or statement without much of a proof.

idk if its really work bro.

Hey i am gonna send you an example what i am using at the moment ( take in mind that i am changing depends the situation i am in ) ! 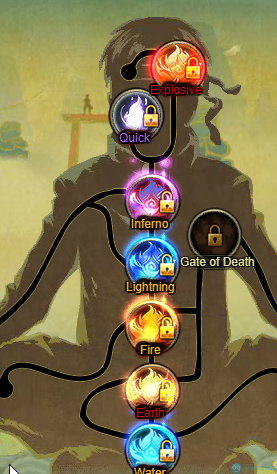 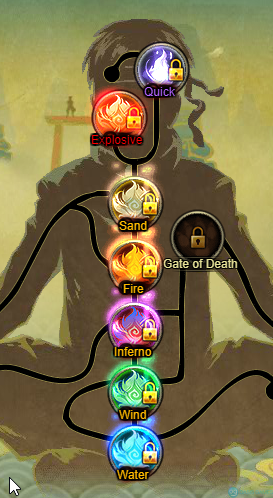 what kind of proof do you want?xDhe just explains what kind of chakra needs to be placed on what kind of ninja.very simple,and you have to prove that he isnt right if you think so

Stats that work but aren't worth investing in 8 gates unless there's ninjas with niche with that certain stat because it takes a lot more of that stat to overpower the opponent by using that stat:

The rest of the stats impact 0 to little value so they're not worth investing compared to the stats listed above. Even if tai/nin p3n3tration(highly unlikely) gave you like a tiny % more damage(highely unlikely people back in the day tested it all the time and it basically had no effect) you're a lot weaker(in real power not phantom power) compared to other players who prioritized in the 5 sacrificing that much defense, resistance, and life in defensive runes for some crappy barely boosting offensive runes.