Hi guys,I wanna talk about combo and buff notifier that we had in game that occurs during battle (i dunno what to call it), But it looks like something in the picture below. 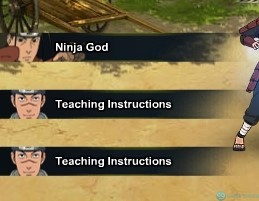 I really appreciate the creator of the game putting notifier like these so player may know whats going on in that battle, But i feel something is missing and that is debuff / Buff canceler notification.

With Jinchuriki like Han coming out in this game, Where he can clear buff and shield both side team in battle, sometimes it may confuse me on what kind of buff that han clears.My friend in-game once asked me about what kind of thing do Han clear, and i said Buff and shield, After that he asked a really important question.

"what if the buff that lasting permanently like ninja god+1? it says permanently, but do H*so clear that buff?".

These kind of question needs a confirmation and making me hesitate to give an answer and yes ofc we can do some research by dueling in-game or asking community, etc. But the point of me making this thread is how we can know more whats going on in battle without having to ask every single time. IMO, we should have a more comprehensive battle notification like :

1. Everytime a ninja cast a mystery or have passives that can remove, clear or even steal buffs, it notifies and telling us which specific buff have been cleared. (Not to mention the aura-type buff that cannot be cleared unless the ninja that gives the aura-type buff dies) And these is very confusing especialy for beginners.

2. Shows a cooldown notification on Ninja that have an auto-ressurect ability like C.hidan, Mu, ETC.

3. Rounds notification should not disappear each round.

I think if we have more comprehensive notification during battle we could have more exciting battle experience and we can think what action should we choose next or in that time. So this is whats going through in my mind right now, So what do you guys think ?