Achroma
On 2017-04-26 21:48:09 ｜ Show this Author Only ｜ Descending Order
1＃ Go To
Hey guys Achroma here brining you some Nagato Lineups for usage and referance!

Nagato is a hard hitting support ninja, with a debuff clear for all units and making himself immune to debuffs before each action, hard hitting AoE mystery,triple chases with ignite and a standard that not only Chaoses but also drains 40 chakra. Yes you read that right STANDARD.


The "It's Mu time mofo Lineup"

A lineup boasting immense AoE damage, tag, Single target burst (yes Mu hits like a truck), A very tanky lineup in general with Mu clone and nagato frontline, Wind reset for even more hilariousness and of course Oonoki mystery and barrier. This is a team you are fully capable of running together with Earthmain running shields and double standard aswell (and its possibly even better) Cons of this team is a lack of interupt and it relying a bit on Nagato himself not being completetly locked down instantly.

The "father son this is ridi" combo

Regarding this lineup, i apologize if people start running it. I can at this point not find a big downside to it except the lack of a round 1 interupt and the high mystery cost of them. This lineup is simply put ridicolous in the common sense. With amazingly hard hitting mysteries, basic attacks, shields, ignite, chaos, Paralyze and of course super armors. Paired with an earthmains defence knowledge this is a team that will basicly force you to stack ignites to beat it.

A burst lineup featuring Sage naruto, kazekage gaara and Nagato. You should be capable of launching multitude of mysteries a round and wreck havoc the dogs of war! While another lineup that lacks an interupt it is an effective burst one!

Nagato gets boosted 40% from both Animal Pain and 30% from Konan and shield too as well as 40% from Main. Konan gets the same.
The only one not getting boost by Main is Animal Pain who gets boosted by Konan and herself only. Furthermore, you don't rely on a barrier for boost either.

can you upload the images again?

I've had some limited success with this, occasionally substituting ginkaku with fu. Both give the extra 20 chakra that lets you use nagato in round 2, as well as enough crowd control to survive round 1. Nice to have 3/4 of the lineup purged of debuffs each round. Usually using a 3-2-3-2-2 dog of hell 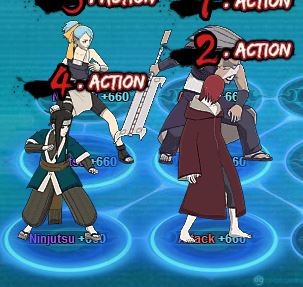 Trying something with the new kakuzu, since they purge debuffs twice a round, but no success yet. ET deidara would probably pull the whole thing together.

All in all nagato does not seem worth it. Probably why I see almost no one use him. The high price point, low damage, and non prompt mystery. I've tried nearly everything to make him work but with little success.

Here is another nagato lineup I've been using. While not great it does seem to be an improvement over what I had. 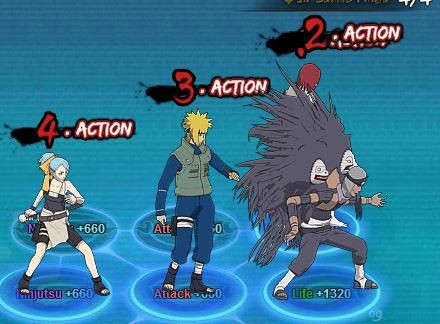 Having nagato in first position lets him shut down mabui teams that require early chakra, with the added benefit of making him immune to debuffs for most of the round. Even if he gets controlled the heal/purge from kakuzu can trigger from a chase and heal him before standard attacks start.

hey. idk why I cant see the images, is there any way to fix that?